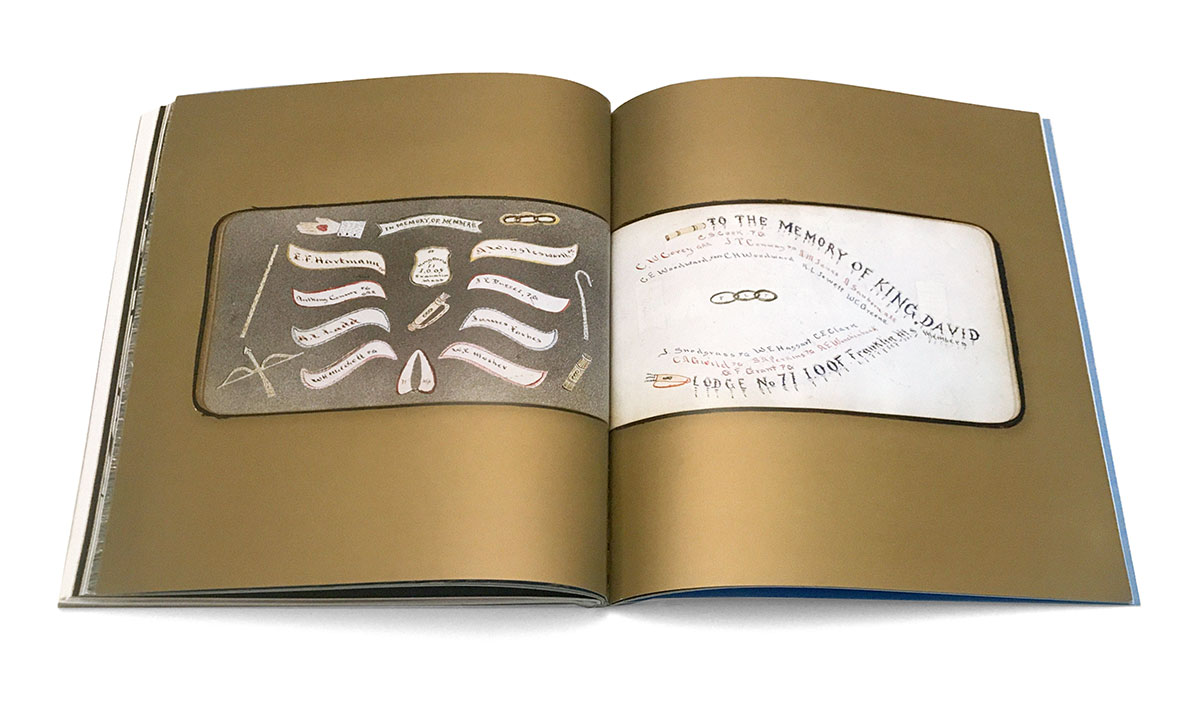 This issue’s found object, discovered at a New York City antiques fair by artist Donald Traver, is a nearly century-old book of stunning epitaphs rendered by one Al Sutherland, a building foreman, rigger, and monument builder born in 1849 in Woonsocket, RI.

1. How did you come across the object? Why did you decide you had to own it? In a dim, cluttered display case Al Sutherland's manuscript found me. The word “Autographs” in gilt lettering ablaze across the slightly worn leather bound covers seemed to hold a promise. As I opened the book and began to examine the drawings I was stuck by the technique AL Sutherland used to record his story. Ruled pen with watercolor and stencil with sprayed ink. Then of course there is the subject mater: Dedication to friends, military units from the American Civil War, agrarian fraternities, volunteer fire departments and numerous adventures in-between. I had found a kindred spirit.

2. Has the object altered your perception of the period it's from, or history in general? A pride of place and the will to act is an underlying theme within the pages of Al Sutherland's album. A strong sense of brotherhood through organizations such as the I.O.O.F. and the K. of P. bound by responsibility to community forged by the blood and terror of the War Between the States.

3. How, as an artist yourself, would you describe Sutherland’s visual style? A cared-for intimacy of a life’s work loved.

4. Can you place him in some tradition? As with all ephemera the fact of its survival is unusual. Journal keeping, scrapbook making, written or rendered observations of the natural world were part of the 19th-Century experience. Readily available materials and a sense of craft enabled men and women from a broad spectrum of social status the opportunity of recording their lives. The quality of expressive force more often than not subjugated technical ability.

The paintings of Donald Traver have been featured in solo exhibitions at San Francisco’s Gregory Lind Gallery, the Pacific Northwest College of Art, and White Columns in New York City. Traver’s work is in the collections of the Whitney Museum and the J.Paul Getty Museum, among others, and he is a past recipient of a National Endowment for the Arts grant. He lives and works in New York City.