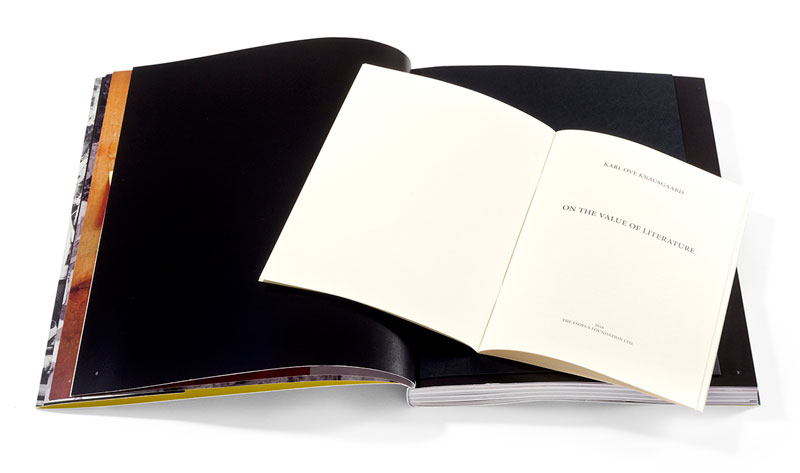 “Reading is an intimate matter, something we do on our own, and it is remarkable in that by allowing our gaze to pass along the page we thereby evoke within us the voice of another, a voice to which we submit, in such a way that we ourselves vanish—to a greater or lesser degree, obviously, but with the best books, we vanish entirely.”—Karl Ove Knausgaard

Why books, sentences, words? A new long-form essay on literature's purpose by the acclaimed Norwegian author Karl Ove Knausgaard (My Struggle), offered in the issue as a removable pamphlet, provides a fascinating answer. Translated from the Norwegian by Martin Aitken.

RELATED EVENT: “A Conversation with Karl Ove Knausgaard” at BookCourt

Born and raised in Norway, Karl Ove Knausgaard is a writer, editor, and essayist best known for his critically acclaimed six-volume autobiographical novel My Struggle [Min Kamp], published in Norway from 2009 to 2011 and since reprinted in 22 languages. Knausgaard’s earlier books include Out of the World (1998), the first debut novel to receive the Norwegian Critics’ Prize for Literature, and A Time for Everything (2004), which was a finalist for the Nordic Council’s Literature Prize. Between 1999 and 2002, Knausgaard coedited Vagant, a Norwegian literary magazine, and in 2013 he published a collection of essays called The Soul’s America: Writings 1996–2013. Knausgaard, who has written for The New Yorker and The New York Times, among other publications, is currently adapting Out of the World into a screenplay.

Martin Aitken is a literary translator living in Denmark. His translations include novels by Kim Leine, Helle Helle, and Peter Høeg. Aitken will soon be commencing work (with Don Bartlett) on the English translation of the sixth and final volume of Karl Ove Knausgaard’s My Struggle.