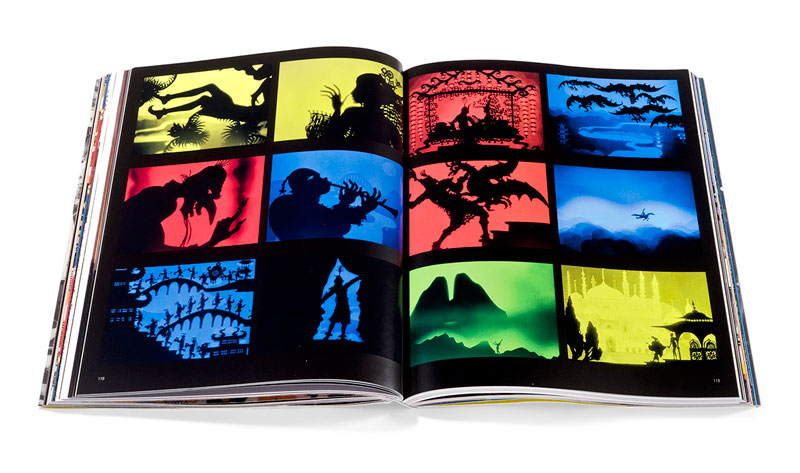 “Reiniger holds a deservedly high place in the history of the animated film. She was a supreme master of an especially challenging animation technique. Her silhouetted “actors”—heroes, heroines, witches, animals, gods, and monsters—execute superbly timed, empathy-inducing performances of lyrical romance, droll comedy, and exciting deeds of derring-do.”—John Canemaker

The latest installment of our “100 Frames” series showcases mesmerizing stills from The Adventures of Prince Achmed, the pioneering 1926 animated feature directed by Lotte Reiniger, introduced here by Oscar-winning filmmaker and historian John Canemaker.

Born in Germany in 1899, Lotte Reiniger was a pioneer of silhouette animation who created more than 40 films, including The Adventures of Prince Achmed (1926), The Magic Flute (1935), and The Rose and the Ring (1979). Reiniger and her husband, Carl Koch, left Germany when Hitler came to power in 1933; unable to obtain a permanent visa from any one country, they spent the better part of a decade moving throughout Europe. During this period, though, Reiniger and Koch managed to create 12 films. After the war Reiniger returned to Berlin, then in 1949 moved to London, where she began making short advertising films for the Ground Film Unit and John Grierson’s General Post Office Film Unit. Reiniger designed the first logo for the National Deaf Children’s Society and illustrated Roger Lancelyn Green’s children’s novel King Arthur and His Knights of the Round Table in 1953. That same year, Reiniger cofounded Primrose Productions, which produced a dozen short silhouette animations for BBC and Telecasting America based on Grimms’ Fairy Tales. She received the Deutscher Filmpreis in 1972, and a Great Cross of the Order of Merit of the Federal Republic of Germany in 1979. Reiniger passed away in Dettenhausen, Germany, in 1981.

John Canemaker is an internationally recognized animator, author, teacher, and film historian. Among his animated films is The Moon and the Son: An Imagined Conversation, which won the 2005 Academy Award for Best Animated Short and a 2006 Emmy Award. One of America’s most respected animation historians, Canemaker is the author of 12 books, including Winsor McCay: His Life and Art (Abrams, 2005). For nearly 30 years, Canemaker has been the director of the animation program at New York University, where he has held a tenured professorship since 1980. A 2009 recipient of NYU’s Distinguished Teaching Award, Canemaker has also been awarded grants by the American Film Institute, PBS, and the Rockefeller Foundation.