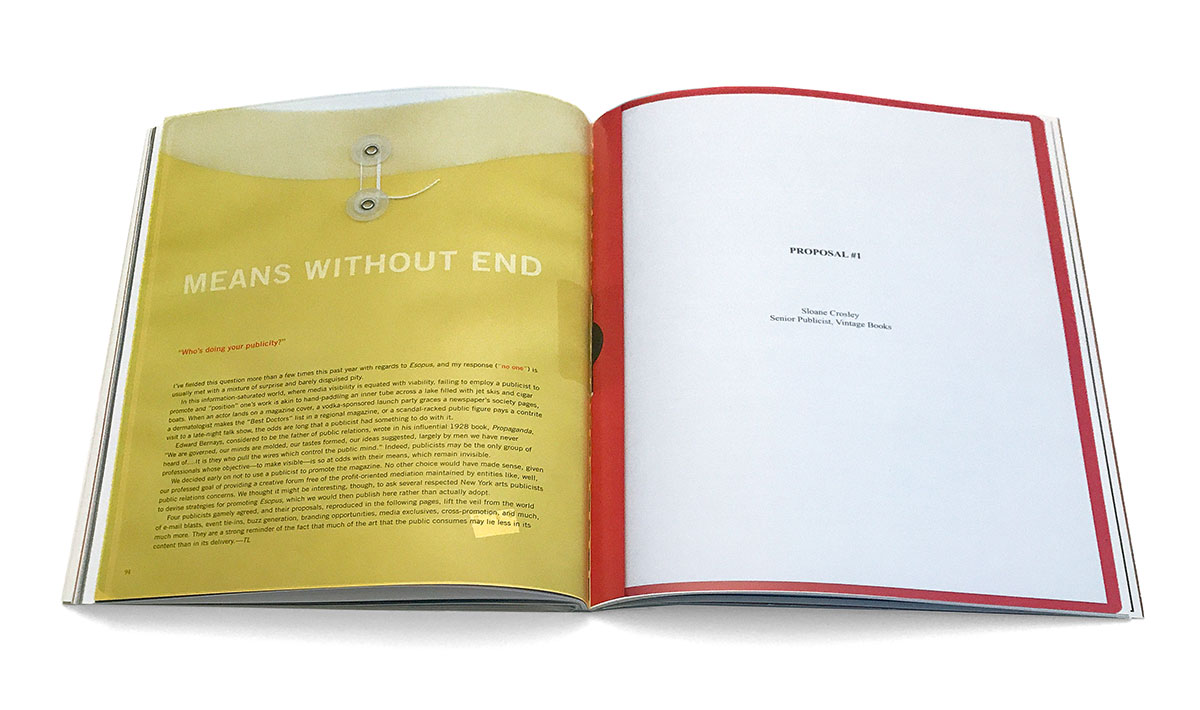 Although Esopus decided early on that using a public relations expert would go against the grain of our goal to provide an unmediated experience for readers (and contributors), we thought we’d ask four respected New York–based arts publicists to devise strategies for promoting the magazine which, rather than instituting, we would publish in the magazine. Detailing everything from e-mail blasts to cross-promotion to event tie-ins, these proposals remind us that much of the art the public consumes may lie less in its content than in its delivery.

Sloane Crosley is the author of How Did You Get This Number (2012) and I Was Told There’d Be Cake (2008). She has worked as a publicist in New York at Vintage Books, a division of Random House. Her writing has also appeared in The Village Voice and on numerous websites. Crosley received her BA from Connecticut College.

Graham Leggatt (d. 2011), was head of the San Francisco Film Society from 2005 until his death. Before joining the Society, he was communications director at New York City’s Film Society of Lincoln Center, and had worked in arts PR for 15 years. He was also the video game columnist for the New York Daily News and Filmmaker magazine and editor of the Journal of Temporary Art.

Baldev Kaur (a pseudonym) is a New York–based PR and marketing specialist with 20 years’ experience in film, music, and television. Kaur, who recently started a boutique agency, was an executive for a number of years at a major record label.

John Melick is the founder and president of Blue Medium, a New York City PR firm specializing in art-world promotion and marketing. Originally from Australia, Melick published a travel guide to his native Sydney in 1999 (HarperCollins) and writes regularly for Australian Gourmet Traveler.