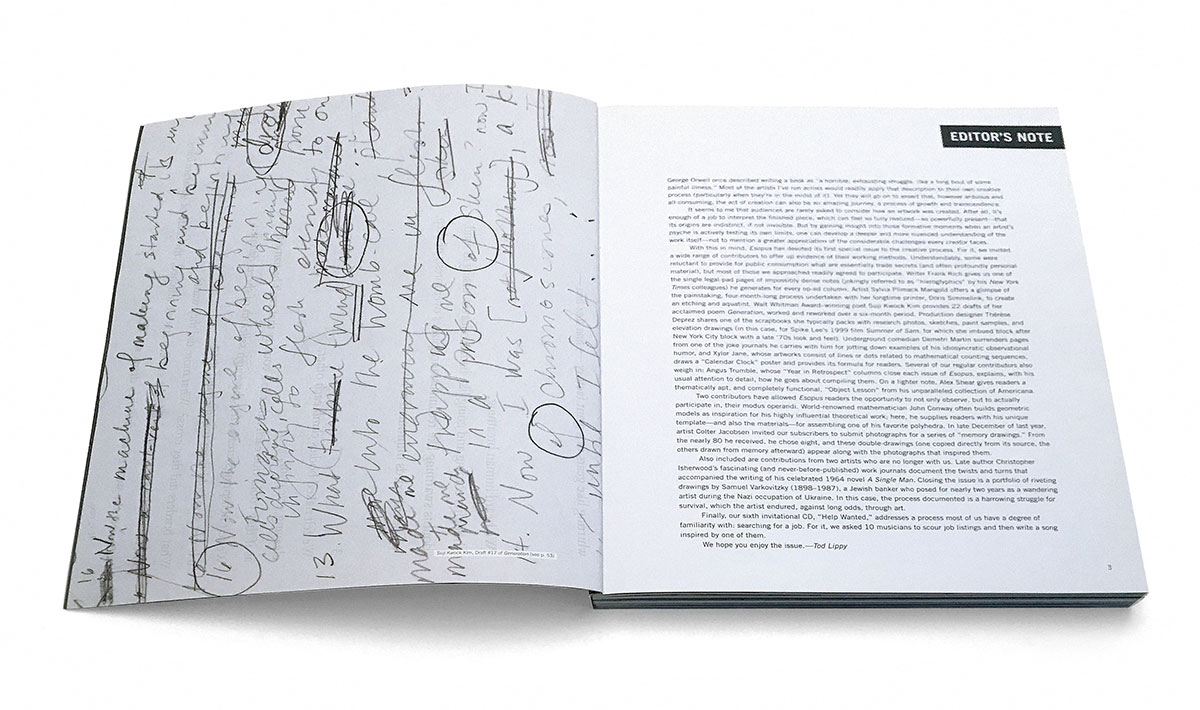 George Orwell once described writing a book as “a horrible, exhausting struggle, like a long bout of some painful illness.” Most of the artists I’ve run across would readily apply that description to their own creative process (particularly when they’re in the midst of it). Yet they will go on to assert that, however arduous and all-consuming, the act of creation can also be an amazing journey, a process of growth and transcendence.

It seems to me that audiences are rarely asked to consider how an artwork was created. After all, it’s enough of a job to interpret the finished piece, which can feel so fully realized—so powerfully present—that its origins are indistinct, if not invisible. But by gaining insight into those formative moments when an artist’s psyche is actively testing its own limits, one can develop a deeper and more nuanced understanding of the work itself—not to mention a greater appreciation of the considerable challenges every creator faces.

With this in mind, Esopus has devoted its first special issue to the creative process. For it, we invited a wide range of contributors to offer up evidence of their working methods. Understandably, some were reluctant to provide for public consumption what are essentially trade secrets (and often profoundly personal material), but most of those we approached readily agreed to participate. Writer Frank Rich gives us one of the single legal-pad pages of impossibly dense notes (jokingly referred to as “hieroglyphics” by his New York Times colleagues) he generates for every op-ed column. Artist Sylvia Plimack Mangold offers a glimpse of the painstaking, four-month-long process undertaken with her longtime printer, Doris Simmelink, to create an etching and aquatint. Walt Whitman Award–winning poet Suji Kwock Kim provides 22 drafts of her acclaimed poem Generation, worked and reworked over a six-month period. Production designer Thérèse DePrez shares one of the scrapbooks she typically packs with research photos, sketches, paint samples, and elevation drawings (in this case, for Spike Lee’s 1999 film Summer of Sam, for which she imbued block after New York City block with a late ’70s look and feel). Underground comedian Demetri Martin surrenders pages from one of the joke journals he carries with him for jotting down examples of his idiosyncratic observational humor, and Xylor Jane, whose artworks consist of lines or dots related to mathematical counting sequences, draws a “Calendar Clock” poster and provides its formula for readers. Several of our regular contributors also weigh in: Angus Trumble, whose “Year in Retrospect” columns close each issue of Esopus, explains, with his usual attention to detail, how he goes about compiling them. On a lighter note, Alex Shear gives readers a thematically apt, and completely functional, “Object Lesson” from his unparalleled collection of Americana.

Two contributors have allowed Esopus readers the opportunity to not only observe, but to actually participate in, their modus operandi. World-renowned mathematician John Conway often builds geometric models as inspiration for his highly influential theoretical work; here, he supplies readers with his unique template—and also the materials—for assembling one of his favorite polyhedra. In late December of last year, artist Colter Jacobsen invited our subscribers to submit photographs for a series of “memory drawings.” From the nearly 80 he received, he chose eight, and these double-drawings (one copied directly from its source, the others drawn from memory afterward) appear along with the photographs that inspired them.

Also included are contributions from two artists who are no longer with us. Late author Christopher Isherwood’s fascinating (and never-before-published) work journals document the twists and turns that accompanied the writing of his celebrated 1964 novel A Single Man. Closing the issue is a portfolio of riveting drawings by Samuel Varkovitzky (1898–1987), a Jewish banker who posed for nearly two years as a wandering artist during the Nazi occupation of Ukraine. In this case, the process documented is a harrowing struggle for survival, which the artist endured, against long odds, through art.

Finally, our sixth invitational CD, “Help Wanted,” addresses a process most of us have a degree of familiarity with: searching for a job. For it, we asked 10 musicians to scour job listings and then write a song inspired by one of them.

We hope you enjoy the issue.—Tod Lippy