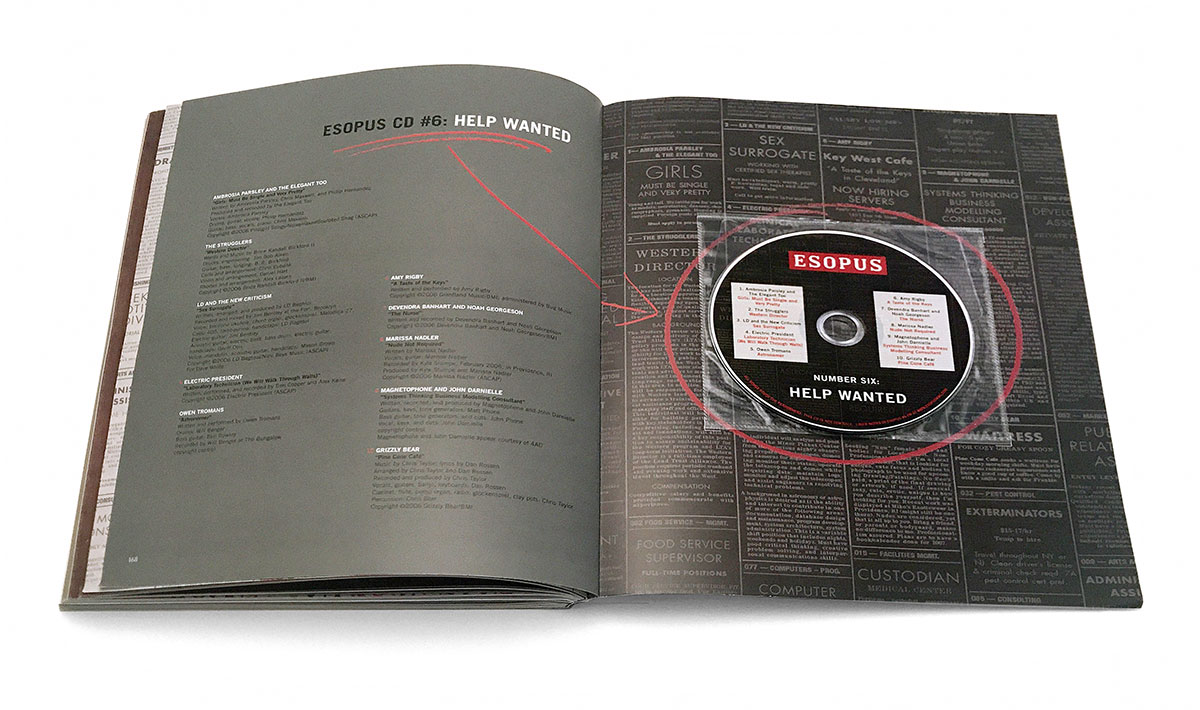 For our sixth CD, Esopus invited participants to scour job listings—from any source, whether a jobs-related website, the classified section of their local paper, or simply a xeroxed flyer in a neighborhood store—and then choose one that they felt would make good material for a song. For many, the request resonated in more ways than one: The independent musicians we approach have for the most part consciously avoided the commercial route, and a number of them must work day jobs to support their musical careers. As Nashville-based singer-songwriter Amy Rigby mentioned in an email to which she attached the waitress listing she found, “The ultimate irony would be if I ended up getting a job there.” Her song, “A Taste of the Keys,” addresses this irony with her trademark wit and emotional punch.

The other selections are equally inspired. Brooklyn band Grizzly Bear’s evocative, even cinematic “Pine Cone Cafe” also takes its inspiration from a restaurant server listing, which gave it an opportunity also to pay tribute to one of their grandmothers who had waitressed for years. English band Magnetophone teamed up with Mountain Goats’ founder John Darnielle on the lush, eerie “Systems Thinking Business Modelling Consultant,” and another Briton, Owen Tromans, went the scientific route with “Astronomer,” which invests the specifics of the job description—tracking asteroids that might collide with earth—with a poetic resonance.

Florida-based Electric President picked an ad for a lab assistant (“Clinical Laboratory Technologist”) and, responding to the urgency of its tone, created a compelling song about a scientist who forms a lab to find the cure for his wife’s terminal illness. Along the same lines, neo-folk avatar Devendra Banhart paired with his frequent collaborator Noah Georgeson for the lulling, hypnotic song “The Nurse,” about a caregiver attending a shark-attack victim.

Three artists gravitated toward ads with vaguely suggestive undertones. Marissa Nadler (“Nude Not Required”) picked a listing seeking “artist’s models” and devised an ethereal song told from the artist’s point of view. LD and the New Criticism reflect on what it means to be a “Sex Surrogate” in their track, an engaging amalgam of Elizabethan song and bar anthem. Ambrosia Parsley and the Elegant Too were drawn to an ominously worded ad announcing “foreign posts” for young women (“Girls: Must be Single and Very Pretty”). Their track is both rousing power-pop and an affecting take on the end of innocence, due in part to Parsley’s astonishingly expressive voice.

The Strugglers’ Randy Bickford was struck by the heading of one listing, “Western Director,” because it invited several interpretations: Was it seeking out a latter-day John Ford? A CEO for a Colorado company? As it turns out, a western director is a public policy official with the Land Trust Alliance. It’s also the title of the Strugglers’ sad, sweet song that it inspired.

01
Ambrosia Parsley & The Elegant Too
Girls: Must Be Single and Very Pretty
<<>>

New York–based Ambrosia Parsley and the Elegant Too is a collaboration between Parsley, perhaps best known as the front woman for Shivaree, and producers, songwriters, and engineers Chris Maxwell (Skeleton Key) and Phil Hernandez (Brave Combo).