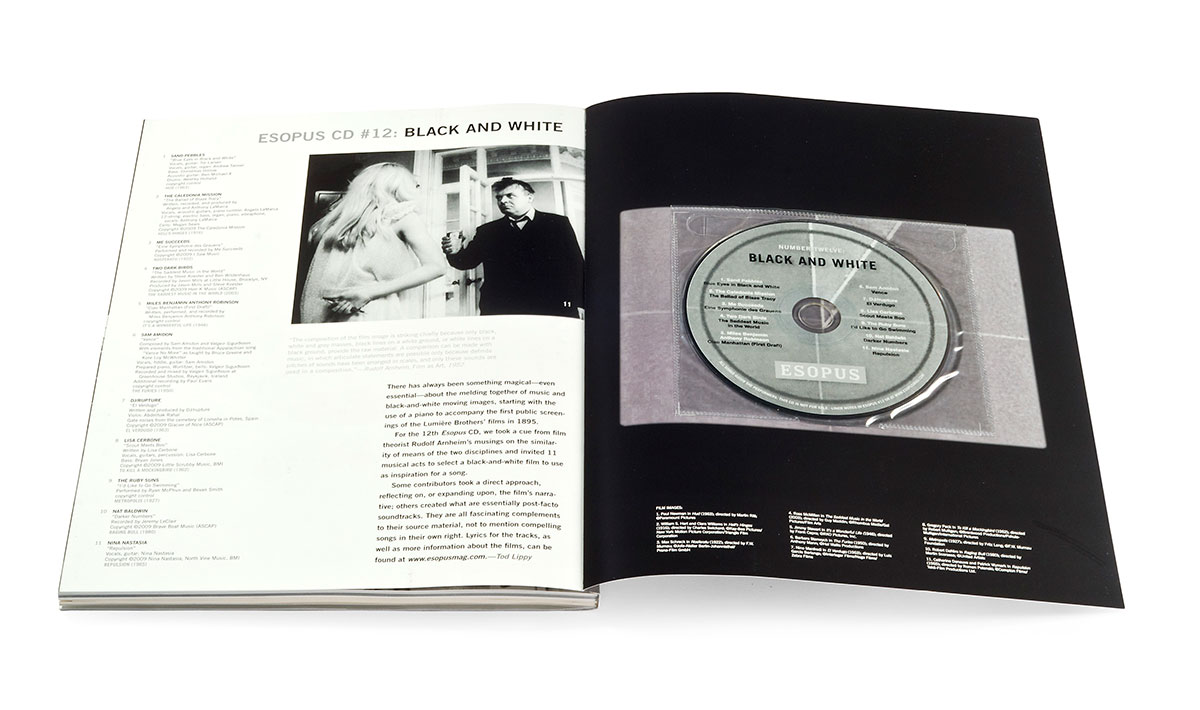 “The composition of the film image is striking chiefly because only black, white and grey masses, black lines on a white ground, or white lines on a black ground, provide the raw material. A comparison can be made with music, in which articulate statements are possible only because definite pitches of sounds have been arranged in scales, and only these sounds are used in a composition.” —Rudolf Arnheim, Film as Art, 1957

There has always been something magical—even essential—about the melding together of music and black-and-white moving images, starting with the use of a piano to accompany the first public screenings of the Lumière Brothers’ films in 1895. For the 12th Esopus CD, we took a cue from film theorist Rudolf Arnheim’s musings on the similarity of means between the two forms and asked 11 musical acts to select a black-and-white film to use as inspiration for a song. Some contributors took a more literal approach, reflecting on, or expanding upon, the film’s narrative; others created what are essentially postfacto soundtracks. They all prove to be fascinating complements to their source material.

1. “Blue Eyes in Black and White” by SAND PEBBLES
This irresistable foot-tapper takes its inspiration from Martin Ritt’s 1963 film Hud, in which Paul Newman plays an arrogant, immoral, and self-centered young cowboy at odds with his honor-bound father, Homer (Melvyn Douglas). The track, which presents itself as an instrumental until the arrival of a transcendent chorus in its last 30 seconds, is a pitch perfect paean to the star, the film, and the era.
FILM CLIP

2. “The Ballad of Blaze Tracy” by THE CALEDONIA MISSION
Charles Swickard’s 1916 silent western Hell’s Hinges tells the story of Rev. Bob Henley (Jack Standing), who moves with his sister Faith (Clara Williams) to lawless Placer Centre, where the ruling locals hire gunman Blaze Tracy (William S. Hart) to run the corrupt Henley out of town. As the Reverend falls from grace, Faith rehabilitates Blaze, who turns against his employers with devastating consequences. This achingly beautiful ballad from Caledonia Mission tells the story from Blaze’s point of view (“God, I ain’t been knowing you real well. But if you mean what you say, I want her....”), creating a haunting evocation of the film’s balancing act between piety and passion.

3. “Eine Symphonie des Grauens” by ME SUCCEEDS
Referencing F.W. Murnau’s classic 1922 film, Nosferatu, Hamburg-based electro-pop outfit Me Succeeds slips into the minds of two of the film’s characters, the vampire Count Orlok (Max Schreck) and one of his potential victims, Ellen Hutter (Greta Schroeder). Driven by pulsing electronic beats, the song’s overlapping male and female vocals convey the thoughts of both characters: Orlok (Lorin Strohm) reveals a guilty conscience about his need to kill in order to live, while Ellen (Mona Steinwidder) decides to save the town from the plague’s culprit by sacrificing her own life.
FILM CLIP

4. “The Saddest Music in the World” by TWO DARK BIRDS
Brooklyn-based band Two Dark Birds explores the twisted narrative of director Guy Maddin’s highly regarded 2003 film The Saddest Music in the World: Lady Helen Port-Huntley (Isabella Rossellini), a legless beer magnate, sponsors a contest to find the saddest song in the world. This ballad beautifully relates the tragic story of the family at the center of the film. With its wistful atmospherics, it would easily have won the contest.
FILM CLIP

5. “Ciao Manhattan (First Draft)” by MILES BENJAMIN ANTHONY ROBINSON
Frank Capra’s 1946 Christmas classic It’s a Wonderful Life follows the deeply depressed George Bailey (played by Jimmy Stewart) as his guardian angel, Clarence (Henry Travers), shows him how the small town of Bedford Falls depends on him in ways he never imagined. Miles Benjamin Anthony Robinson happened to be watching the film at his family’s house in Portland as he made the decision to leave New York after 10 years of living and working in the city. This soaring, anguished track conveys the conflicted nostalgia with which both Robinson and Stewart’s character are wrestling.
FILM CLIP

7. “El Verdugo” by DJ/RUPTURE
The business of death is the central framework of El Verdugo (1963), the pitch-black comedic tale of José Luis Rodríguez, in which a young undertaker (Nino Manfredi) agrees to take on the job of a retiring executioner in order to marry his daughter Carmen (Emma Penella). Through his characteristically brilliant use of samples (including the evocative creaking of a cemetary gate he recorded in Lodes, Spain), DJ/rupture holds a sonic mirror up to the dark, fractured world of this cult classic.
FILM CLIP

9. “I’d Like to Go Swimming,” by THE RUBY SUNS
The silent classic Metropolis (1927)—which set records at the time as the most expensive film ever made—takes place in a futuristic urban dystopia where the subterranean “working” class are determined to rebel against the ruling “thinking” class, even if it means the destruction of their city. It serves as a worthy subject for The Ruby Suns, whose reverb-rich piece of propulsive psychedelia offers a perfect contemporary soundtrack to Fritz Lang’s masterpiece.
FILM CLIP

10. “Darker Numbers” by NAT BALDWIN
Martin Scorsese’s Raging Bull (1980) stars Robert De Niro as Jake La Motta, the real-life middleweight boxer whose personal demons ultimately destroyed both his professional and personal lives. Nat Baldwin, whose hypnotic work with bass cello brings to mind the late Arthur Russell, contributes a brooding track inspired by the film that posits LaMotta’s realization of his loss as he regards himself in a mirror.
FILM CLIP

11. “Repulsion” by NINA NASTASIA
In Roman Polanski’s first English-language film, Repulsion (1965), Catherine Deneuve stars as Carol, a young manicurist driven insane by her dichotomous attraction to and fear/hatred of sex. Singer-songwriter Nina Nastasia’s stripped-down take on the film is characteristically concise, strikingly intimate, and driven, as always, by her extraordinary voice.
FILM CLIP