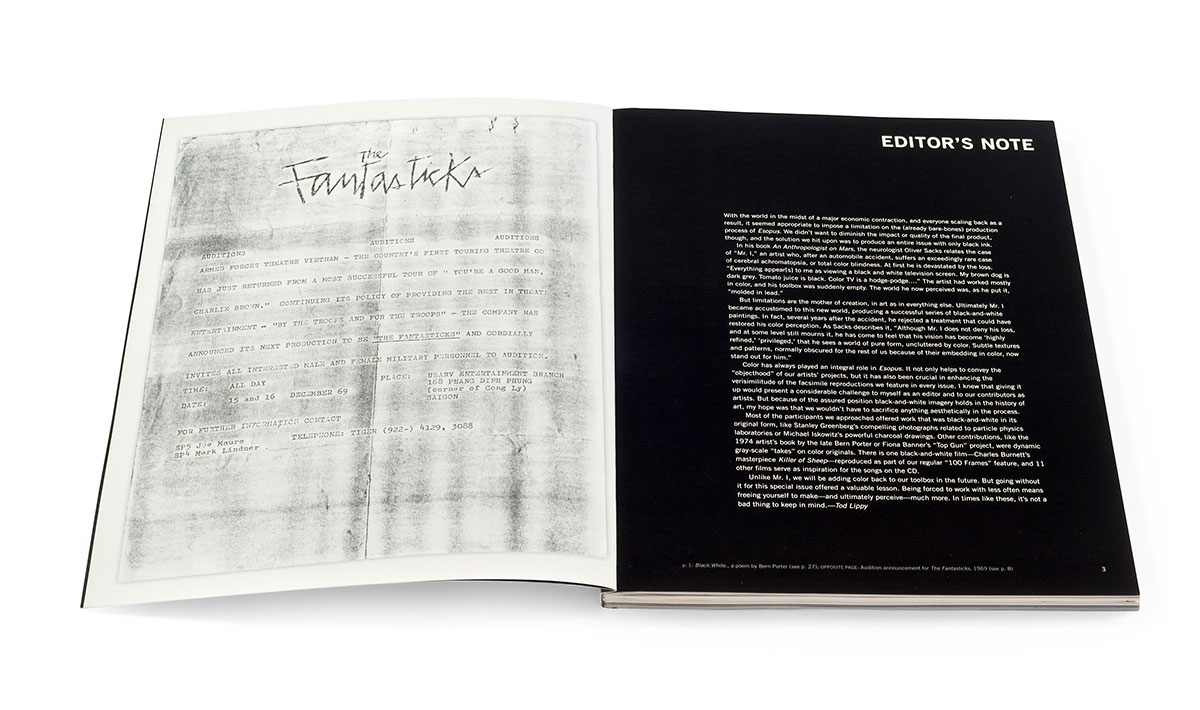 With the world in the midst of a major economic contraction, and everyone scaling back as a result, it seemed appropriate to impose a limitation on the (already bare-bones) production process of Esopus. We didn’t want to diminish the impact or quality of the final product, though, and the solution we hit upon was to produce an entire issue with only black ink.

In his book An Anthropologist on Mars, the neurologist Oliver Sacks relates the case of “Mr. I,” an artist who, after an automobile accident, suffers an exceedingly rare case of cerebral achromatopsia, or total color blindness. At first he is devastated by the loss. “Everything appear[s] to me as viewing a black and white television screen. My brown dog is dark grey. Tomato juice is black. Color TV is a hodge-podge....” The artist had worked mostly in color, and his toolbox was suddenly empty. The world he now perceived was, as he put it, “molded in lead.”

But limitations are the mother of creation, in art as in everything else. Ultimately Mr. I became accustomed to this new world, producing a successful series of black-and-white paintings. In fact, several years after the accident, he rejected a treatment that could have restored his color perception. As Sacks describes it, “Although Mr. I does not deny his loss, and at some level still mourns it, he has come to feel that his vision has become ‘highly refined,’ ‘privileged,’ that he sees a world of pure form, uncluttered by color. Subtle textures and patterns, normally obscured for the rest of us because of their embedding in color, now stand out for him.”

Color has always played an integral role in Esopus. It not only helps to convey the “objecthood” of our artists’ projects, but it has also been crucial in enhancing the verisimilitude of the facsimile reproductions we feature in every issue. I knew that giving it up would present a considerable challenge to myself as an editor and to our contributors as artists. But because of the assured position black-and-white imagery holds in the history of art, my hope was that we wouldn’t have to sacrifice anything aesthetically in the process.

Most of the participants we approached offered work that was black-and-white in its original form, like Stanley Greenberg’s compelling photographs related to particle physics laboratories or Michael Iskowitz’s powerful charcoal drawings. Other contributions, like the 1974 artist’s book by the late Bern Porter or Fiona Banner’s “Top Gun” project, were dynamic gray-scale “takes” on color originals. There is one black-and-white film—Charles Burnett’s masterpiece Killer of Sheep—reproduced as part of our regular “100 Frames” feature, and 11 other films serve as inspiration for the songs on the CD.

Unlike Mr. I, we will be adding color back to our toolbox in the future. But going without it for this special issue offered a valuable lesson. Being forced to work with less often means freeing yourself to make—and ultimately perceive—much more. In times like these, it’s not a bad thing to keep in mind.—Tod Lippy