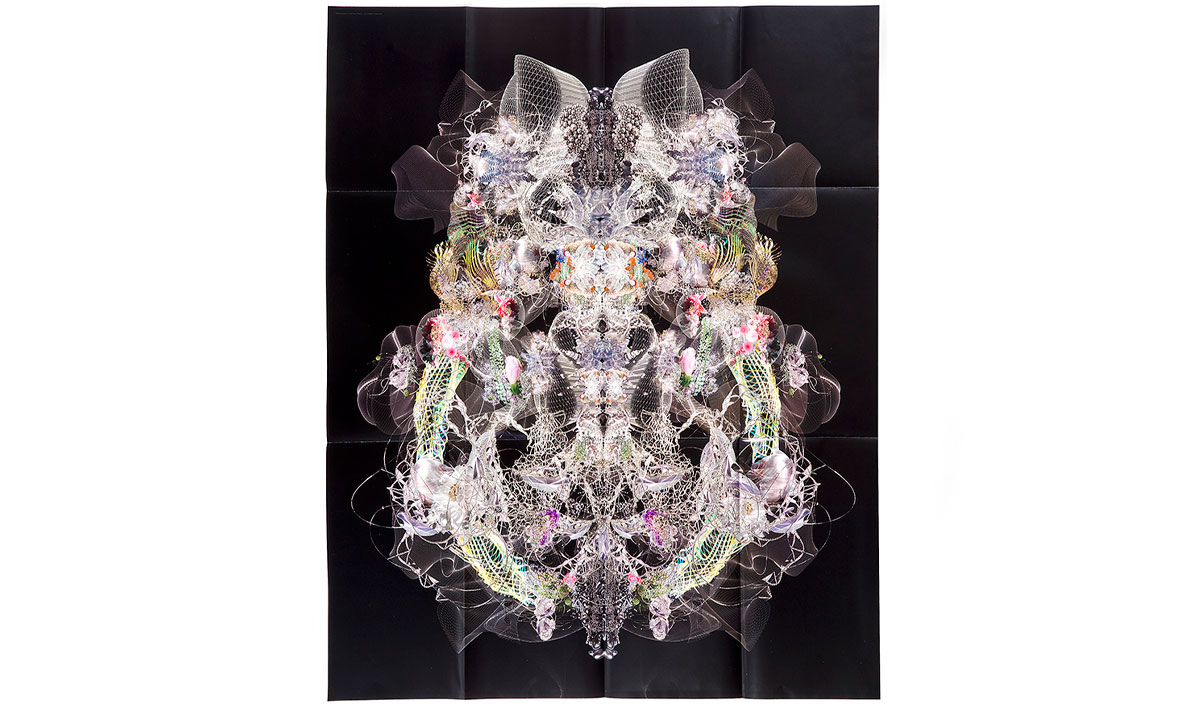 The Brooklyn-based artist takes three different approaches to the subject of infinity—5 pencil drawings from Shotz's sketchbook, a fascinating conversation on the topic Shotz conducted via email with Satyan L. Devadoss, associate professor of mathematics at Williams College, and Priyamvada (Priya) Natarajan, a cosmologist and professor at Yale University; and a spectacular 25" x 29" removable poster.

Alyson Shotz graduated with a B.F.A. from the Rhode Island School of Design in 1987 and an M.F.A. from the University of Washington in 1991. Her work, which explores perception, light, and space through sculptures, photography, and painting, is included in the collections of the Solomon R. Guggenheim Museum, the Hirshhorn Museum and Sculpture Garden, the Museum of Modern Art, the San Francisco Museum of Modern Art, MASS MoCA, and the Whitney Museum of American Art. Shotz, who is represented by Derek Eller Gallery in New York, has had numerous solo shows, including forthcoming exhibitions at the Phillips Collection in Washington, D.C., and the Indianapolis Museum of Art. She has received a New York Foundation for the Arts artist fellowship in painting, a Saint Gaudens Memorial Fellowship, and grants from Art Matters and the Pollock-Krasner Foundation. From 2005 to 2008, Shotz was a Yale University Artist in Residence, and she was a Stanford University Sterling Visiting Scholar (in the Department of Chemical and Systems Biology) in 2012.

Priyamvada Natarajan is a professor in the Departments of Astronomy and Physics at Yale University. Her research is focused on exotica in the universe—dark matter, dark energy and black holes. Professor Natarajan is noted for her key contributions to two of the most challenging problems in cosmology: Mapping the detailed distribution of dark matter and tracing the growth history of black holes over cosmic time in the universe. She holds undergraduate degrees in physics and mathematics as well as a Masters Degree from the Program in Science, Technology & Society at M.I.T. She was awarded a PhD from the University of Cambridge, where she was the first woman astrophysicist to be elected a Fellow of Trinity College, Cambridge. The recipient of numerous awards and prizes, her recent honors include a Radcliffe Fellowship and a Guggenheim Fellowship. She was also recently elected Fellow of the American Physical Society. In addition to her appointment at Yale, she holds the Sophie and Tycho Brahe visiting professorship at the Dark Cosmology Center, Niels Bohr Institute, at the University of Copenhagen, Denmark. She is also the current Chair of the Womens Faculty Forum at Yale, which brings together senior women faculty to further gender equity and scholarship for women at Yale. She is very invested in the public dissemination of science and in promoting numerical literacy. Priya's own research work has been featured on the BBC, NOVA, CNN, USA Today and many other media outlets including online sources, she frequently writes Op-Ed pieces about science and has also published a collection of poems.

Satyan L. Devadoss is an associate professor of mathematics at Williams College and holds a Ph.D. in mathematics from Johns Hopkins University. His research in the study of shapes, ranging from particle collisions and cartography to origami and juggling, has earned him grants from the National Science Foundation and visiting positions at the University of California at Berkeley, Ohio State University, the University of Nice, and the Mathematical Sciences Research Institute. He received the Henry Alder Award in 2007, given by the Mathematical Association of America to honor faculty whose teaching has been extraordinarily successful. He recently created a 36-lecture DVD course on the shape of nature, published by The Great Courses.