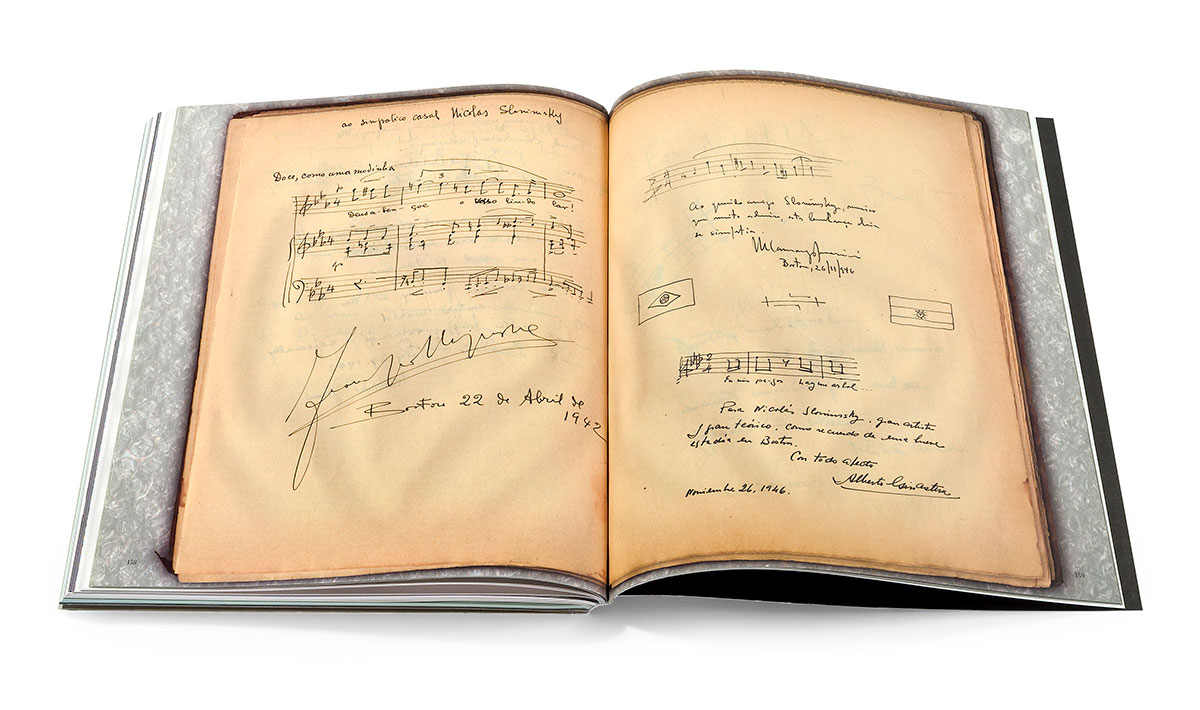 This selection of pages from the guest book of music legend Nicolas Slonimsky and his wife, art critic Dorothy Adlow, features written tributes and hand-written musical excerpts from Aaron Copland, Henry Cowell, Dmitri Shostakovich, and many other important composers, musicians, and artists.

Electra Slonimsky Yourke has edited seven volumes of work by her father, the late musicologist Nicolas Slonimsky, including The Listener’s Companion (Schirmer, 1999), the four-volume Writings on Music (Routledge, 2004–05), and a forthcoming collection of Slonimsky’s letters to be published by the University of Rochester Press. Yourke is the manager of investigations at the New York District Office of the Federal Equal Employment Opportunity Commission.

Dorothy Adlow was born in Boston, MA, on June 7, 1901. The daughter of Eastern European immigrants, she earned undergraduate and graduate degrees from Radcliffe College and, after a brief stint at the Boston Evening Transcript, began a 41-year career as art critic for The Christian Science Monitor. Adlow, the first woman invited to speak at the Carnegie International Exhibit Series (in 1930), lectured extensively, served on art juries, and appeared often on television programs produced by the Boston Museum of Fine Arts. In 1953, she won the American Federation of Arts Art Critic Award, and in 1957 she received the Art Citation of Merit from Boston University. Adlow had been married to the musicologist Nicolas Slonimsky for 33 years at her death on January 11, 1964.

Born in St. Petersburg, Russia, in 1894, Nicholas Slonimsky was a writer, lexicographer, pianist, composer, conductor, and champion of contemporary music. In 1918, he fled Russia, eventually arriving in Paris where he became active in that city’s music scene. Slonimsky emigrated to the U.S. in 1923 to take a position as opera coach at the Eastman School of Music in Rochester, New York. After moving to Boston in 1925 to work as an assistant to conductor Serge Koussevitzky at the Boston Symphony Orchestra, he formed the Boston Chamber Orchestra, which presented and premiered work by musicians such as Charles Ives and Edgar Varèse. Slonimsky’s compositions include Studies in Black and White (1928), My Toy Balloon (1942), and Minitudes (1971–77). In 1958, he took over the editorship of Baker’s Biographical Dictionary of Musicians, maintaining that role until 1992. His other books include Music Since 1900 (1938), Thesaurus of Scales and Melodic Patterns (1947), Lexicon of Musical Invective (1953), Lectionary of Music (1989), and his acclaimed autobiography Perfect Pitch (1988). Known for his sharp wit and sly sense of humor, Slonimsky appeared on The Tonight Show with Johnny Carson and was also a contestant on the game show The Big Surprise in 1956. Slonimsky, who was married to the art critic Dorothy Adlow, died on Christmas Day, 1995, at the age of 101.