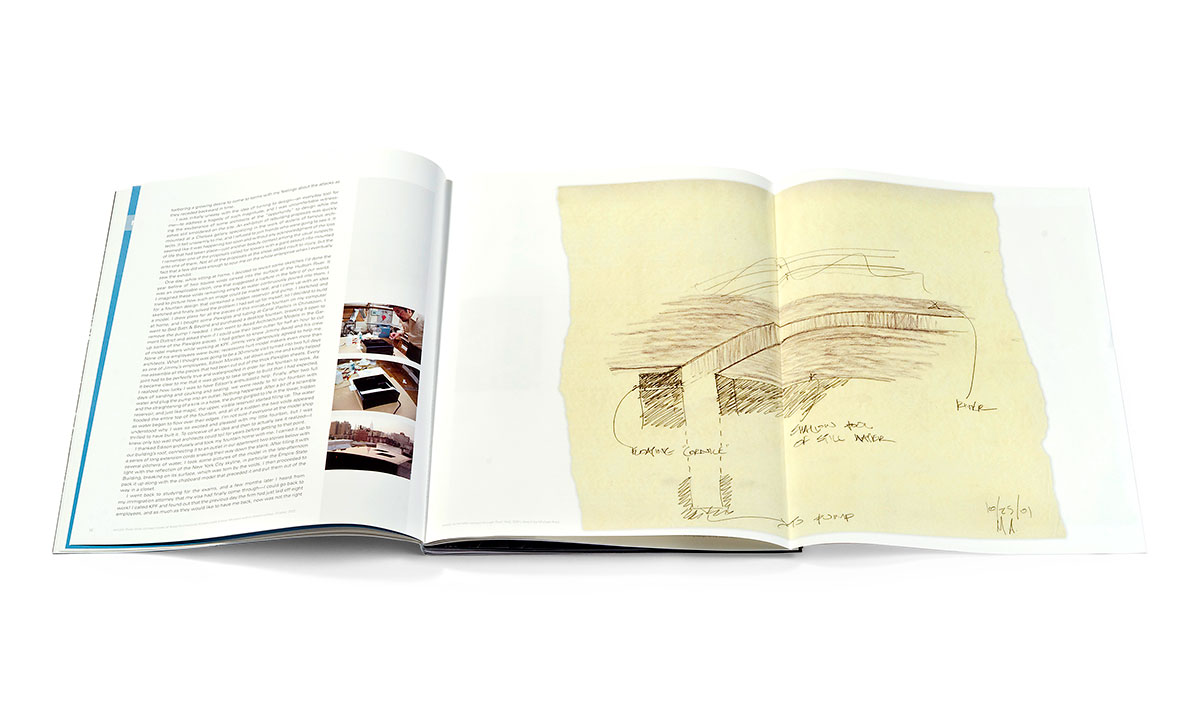 “One day, while sitting at home, I decided to revisit some sketches I’d done the year before of two square voids carved into the surface of the Hudson River. It was an inexplicable vision, one that suggested a rupture in the fabric of our world.”—Michael Arad

There has been no shortage of press coverage of the difficult, nearly decade-long process of building the acclaimed 9/11 memorial after architect Michael Arad's "Twin Voids" submission won the competition in 2004. Here, Arad offers for the first time his account of the conception and development of his original design. The article is accompanied by reproductions of Arad's earliest sketches as well as stunning renderings of the underground galleries that were essential to his initial concept of the memorial (and which were ultimately excised). Also included is a full-scale replica, in the form of a removable poster, of Arad's original submission board for the competition.

A native of Israel, Michael Arad was raised in Jerusalem, the U.K., the U.S., and Mexico. He earned a B.A. from Dartmouth College in 1994 and a M.A. in architecture from the Georgia Institute of Technology in 1999. Arad worked for the architectural firm Kohn Pedersen Fox in New York City before joining the design department of the New York City Housing Authority, where he was employed when his design for the National September 11 memorial at the World Trade Center site was selected by the jury of the competition. Arad joined the New York firm of Handel Architects as a partner in April 2004. In 2006, he was one of six recipients of the Young Architects Award of the American Institute of Architects (AIA). In 2012, he was awarded the AIA Presidential Citation for his work on the 9/11 memorial and also received the Liberty Award for Artistic Leadership from the Lower Manhattan Cultural Council. In 2013, his work on the memorial was recognized with honor awards from the AIA and American Society of Landscape Architects. Arad lives in New York City with his wife, Melanie Arad Fitzpatrick, and their three children.