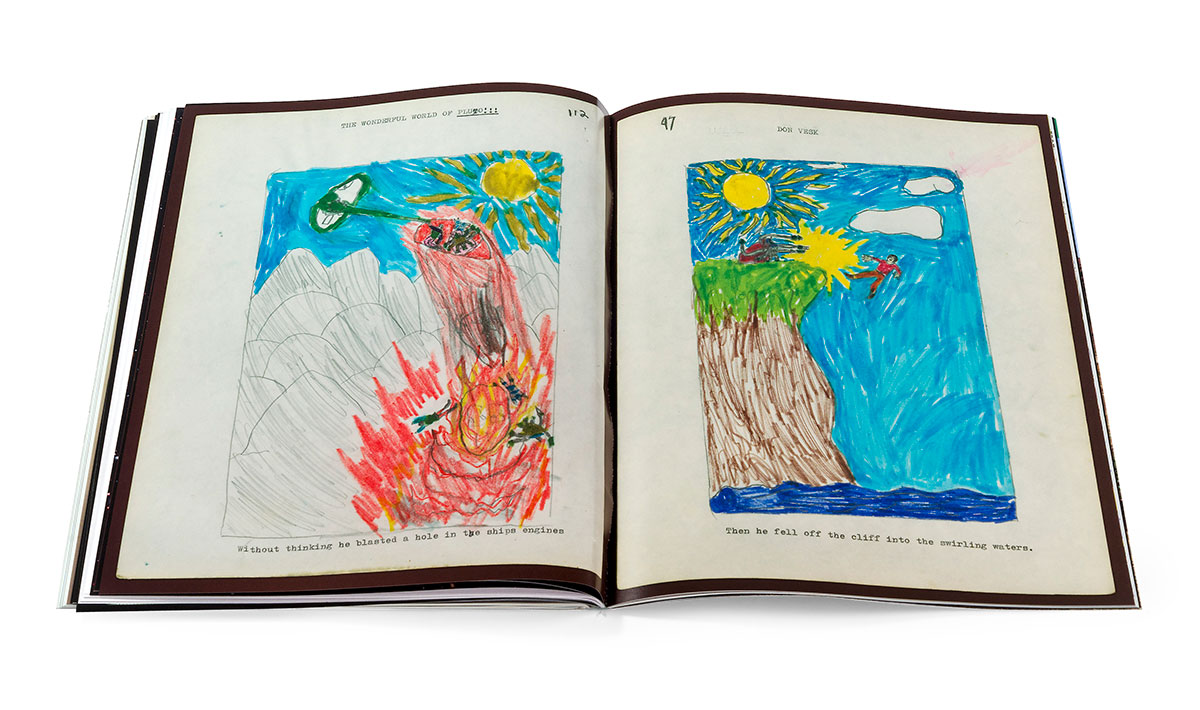 “My mother read everything I wrote, but she always complained that there were too many explosions. I gave her chapters of The Wonderful World of Pluto as I was writing it, and at some point she said, ‘Someone gets blown up on every page!’ So my conscience pricked me and I wrote a chapter at the end of the book—which was somewhat insincere—in which the main character wanders around, feeling glad that there’s ‘no more violence.’”—Kenneth Lonergan

“Early Works,” a new series in Esopus, will make periodic incursions into the purest source of creativity: the unbridled sensibilities of a child. Each installment will feature examples of youthful work that represents the first glimmers of creativity from well-known artists and writers. We inaugurate the series with a contribution from acclaimed playwright and filmmaker Kenneth Lonergan, who shares a collection of books he began writing and illustrating as a young boy. Coming from the creator of such keenly observed plays as This is Our Youth and Lobby Hero and the nuanced, character-driven films You Can Count on Me and Margaret, their subject matter may come as something of a surprise.

Born in 1962 and raised on New York City’s Upper West Side, playwright and filmmaker Kenneth Lonergan attended Wesleyan University and earned his B.F.A. from New York University’s playwriting program. His plays include Medievel Play (2012); The Starry Messenger (2009); Lobby Hero (2001; winner of the Outer Critics Circle Best Play Award); The Waverly Gallery (2000; Pulitzer Prize finalist); and This Is Our Youth (1996; Drama Desk Best Play nominee). Lonergan wrote the screenplay for Analyze This (1991) and cowrote Martin Scorsese’s Gangs of New York, which received Writers Guild of America and Academy Award nominations for best original screenplay. His first film, You Can Count on Me, was nominated for an Academy Award for best screenplay, won the 2000 Sundance Festival’s Grand Jury Prize and Waldo Salt Screenwriting Award, and received best screenplay awards from the New York Film Critics Circle, the Writers Guild of America, and the National Board of Review. Lonergan’s second film, Margaret, was released in 2011 and subsequently rereleased in a longer version recut by Lonergan in 2012. The film, which starred Anna Paquin in a performance that earned her an actress-of-the-year award from the London Critics Circle, was called a “masterpiece” by The New York Times. Earlier this year, Grove Atlantic published the screenplay in book form with an introduction by playwright Tony Kushner. Lonergan resides in New York City’s Greenwich Village with his wife, the actress J. Smith-Cameron, and their daughter.