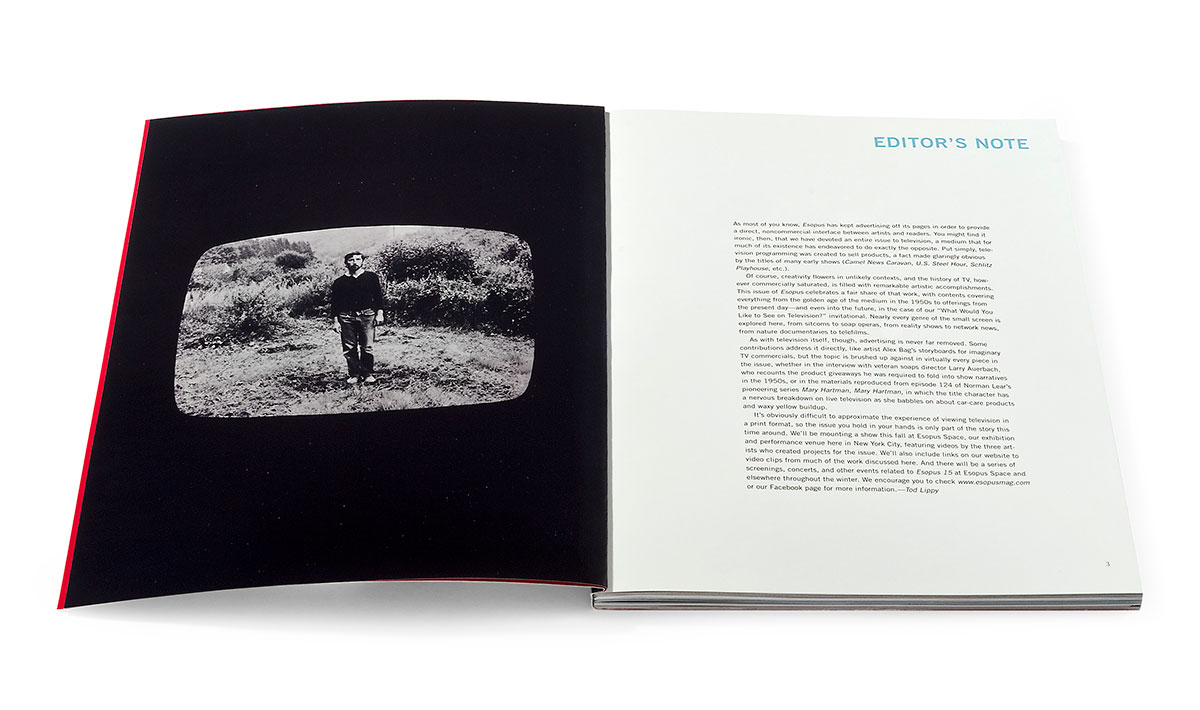 As most of you know, Esopus has kept advertising off its pages in order to provide a direct, noncommercial interface between artists and readers. You might find it ironic, then, that we have devoted an entire issue to television, a medium that for much of its existence has endeavored to do exactly the opposite. Put simply, television programming was created to sell products, a fact made glaringly obvious by the titles of many early shows (Camel News Caravan, U.S. Steel Hour, Schlitz Playhouse, etc.).

Of course, creativity flowers in unlikely contexts, and the history of TV, however commercially saturated, is filled with remarkable artistic accomplishments. This issue of Esopus celebrates a fair share of that work, with contents covering everything from the golden age of the medium in the 1950s to offerings from the present day—and even into the future, in the case of our “What Would You Like to See on Television?” invitational. Nearly every genre of the small screen is explored here, from sitcoms to soap operas, from reality shows to network news, from nature documentaries to telefilms.

As with television itself, though, advertising is never far removed. Some contributions address it directly, like artist Alex Bag’s storyboards for imaginary TV commercials, but the topic is brushed up against in virtually every piece in the issue, whether in the interview with veteran soaps director Larry Auerbach, who recounts the product giveaways he was required to fold into show narratives in the 1950s, or in the materials reproduced from episode 124 of Norman Lear’s pioneering series Mary Hartman, Mary Hartman, in which the title character has a nervous breakdown on live television as she babbles on about car-care products and waxy yellow buildup.

It’s obviously difficult to approximate the experience of viewing television in a print format, so the issue you hold in your hands is only part of the story this time around. We’ll be mounting a show this fall at Esopus Space, our exhibition and performance venue here in New York City, featuring videos by the three artists who created projects for the issue. We’ll also include links on our website to video clips from much of the work discussed here. And there will be a series of screenings, concerts, and other events related to Esopus 15 at Esopus Space and elsewhere throughout the winter. We encourage you to check www.esopusmag.com or our Facebook page for more information.—Tod Lippy