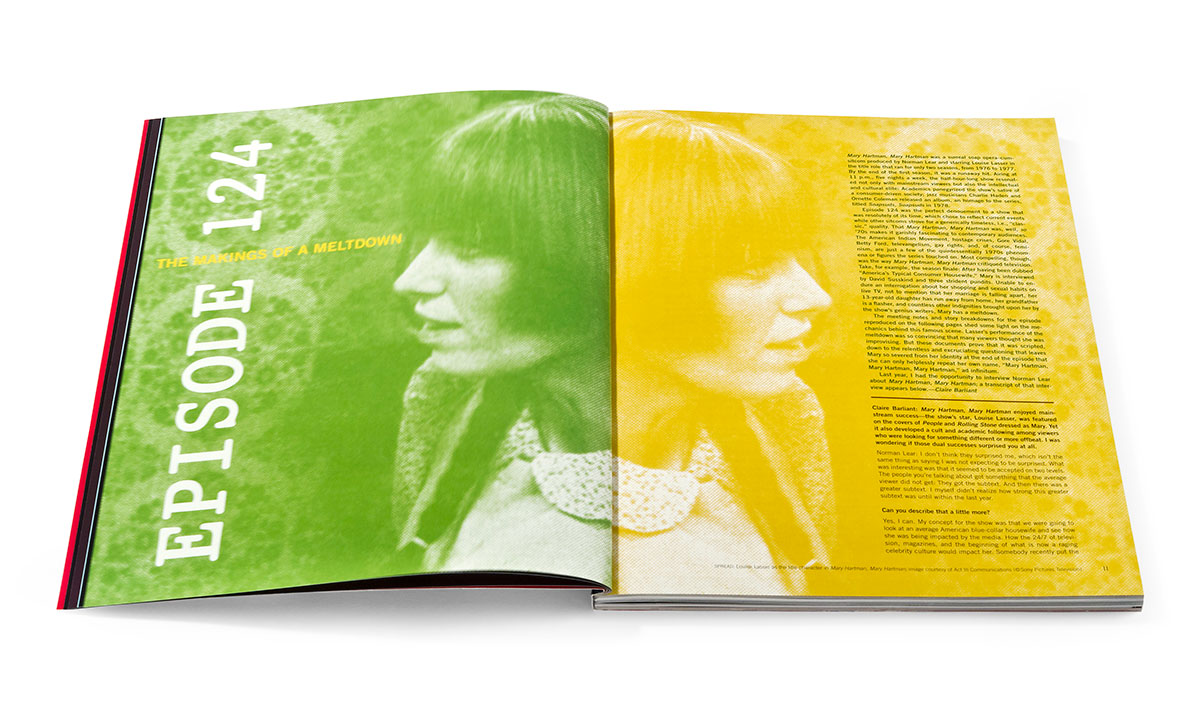 "The entire episode was probably 20 minutes, and she went crazy. She was driven fucking nuts by the media. I didn’t realize how complete that subtext was. I was thrilled. The breakdown was…I’ve never seen a better performance ever, anywhere."—Norman Lear

Mary Hartman, Mary Hartman was a surreal soap opera–cum-sitcom produced by Norman Lear and starring Louise Lasser in the title role that ran for only two seasons, from 1976 to 1977. The show was resolutely of its time, dealing frankly with everything from gay rights and feminism to televangelism and hostage crises—and one of its main subjects for critique was television itself. Nowhere is this more evident than in the last episode of the first season, when the title character has a nervous breakdown on live television. Norman Lear provided Esopus with his story meeting transcripts and script notes for the episode, which are reproduced here in facsimile; they follow an interview with Lear conducted by Claire Barliant.

Norman Lear was born in 1922 in Connecticut and attended Emerson College before serving in World War II from 1942 to 1945. He began his television-writing career for The Ford Star Revue in 1950, and wrote later for comedies such as The Martha Raye Show and The George Gobel Show. In 1958, Lear cofounded Tandem Productions with Bud Yorkin. The company produced several films, including Divorce American Style, whose screenplay, written by Lear, was nominated for an Academy Award in 1967. Tandem’s first TV series, All in the Family, ran for nine seasons on CBS and earned four Emmy Awards. It was followed by a number of other successful and often groundbreaking comedies, including The Jeffersons, Maude, Good Times, One Day at a Time, and Mary Hartman, Mary Hartman. In addition to his work in television, Lear has pursued a number of social causes. In 1981, he founded People For the American Way, a nonprofit organization devoted to the protection of civil liberties. Lear received the National Medal of Arts from President Bill Clinton in 1999.

Claire Barliant earned her M.A. from the Center for Curatorial Studies at Bard College in 2004 and her B.A. in comparative literature from Smith College in 1997. The Brooklyn-based writer has contributed to the publications Afterall, Artforum, ARTNews, Art on Paper, Modern Painters, and The Village Voice. Barliant has also worked as a freelance editor for a variety of publications, as well as for the Museum of Modern Art, the Whitney Museum of American Art, and for the author Wayne Koestenbaum and the poet Bruce Hainley.