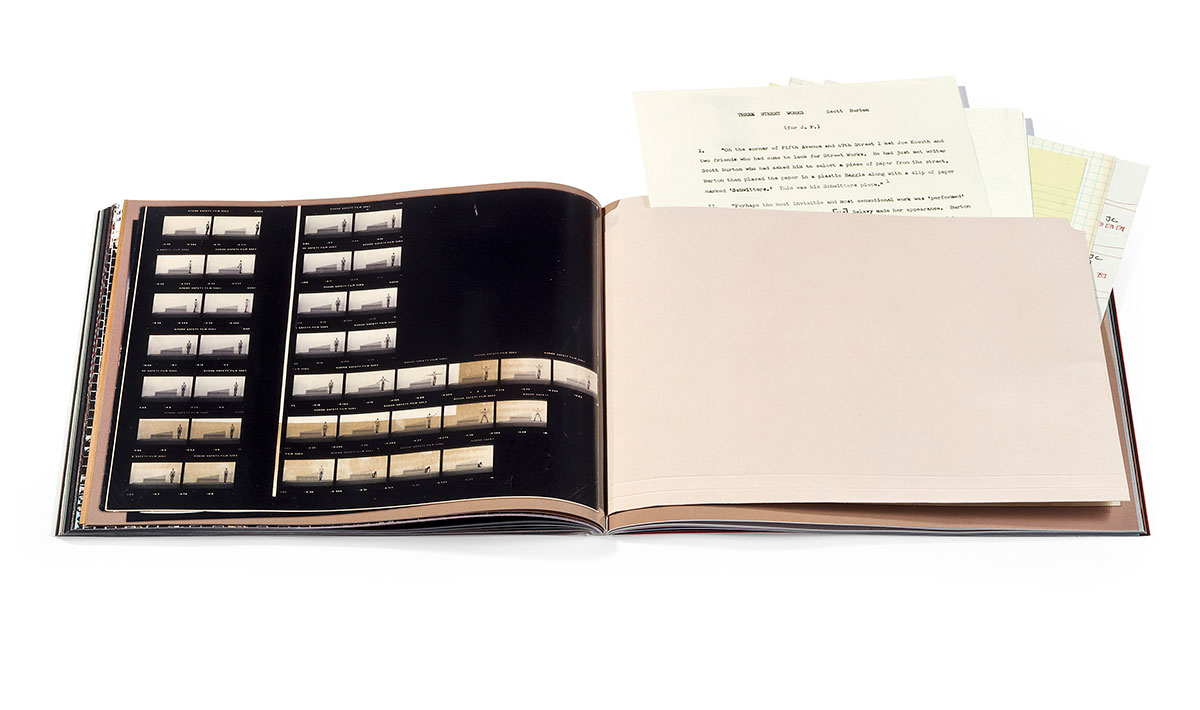 “While this material maps a clear path to Burton’s justly celebrated furniture and three-dimensional plastic work, it also firmly establishes the importance of his performance-based practice, through which the artist first identified his interest in the exploration of everyday life, honed his preoccupation with combining (and replacing) the human figure with inert forms, and examined the impact of the individual in isolation as well as in a social space.”—Michelle Elligott

The 12th installment of our recurring series with the Museum of Modern Art Archives presents a treasure trove of items—including notebooks, drafts of texts, photographs, and sketches and diagrams for forgotten artworks—from late artist Scott Burton's archive, all of which relate to his groundbreaking performances from the 1960s and 1970s.

The furniture pieces and sculptures of artist Scott Burton (1939-1989) can be found in the collections of the Whitney Museum of American Art, the Tate Modern in London, and the Museum of Modern Art in New York, among many other institutions throughout the world. Burton obtained a B.A. in literature from Columbia University and an M.A. in literature from New York University. After working as an editor at ARTnews and Art in America in the 1960s, Burton embarked upon a series of performance-based work that ultimately evolved into the sculptural practice for which he is best known. Commissions for Burton’s site-specific furniture and space design include his contribution to the National Oceanic and Atmospheric Administration Regional Center, Seattle (1983); the complete park design of Pearlstone Park in Baltimore (1985); and, with Siah Armajani and Cesar Pelli Architects, the Hudson River Plaza of Battery Park City and the World Financial Center (1988). In 1986 the retrospective exhibition “Scott Burton” was held at the Baltimore Museum of Art and accompanied by a comprehensive catalog. In 1989, “Scott Burton: Sculptures 1980-89” was mounted in both Stuttgart and Paris. While attending the installation of the show in Stuttgart, Burton became seriously ill and was hospitalized; he died of complications from AIDS on December 29, 1989, at the age of 50.

Chief of Archives, Library, and Research Collections at the Museum of Modern Art, New York, Michelle Elligott recently organized Devenir moderne, part of the MoMA exhibition Être moderne at the Fondation Louis Vuitton in Paris. She coedited the book Art in Our Time: A Chronicle of the Museum of Modern Art and cocurated MoMA’s 1969 exhibition; her book on Rene d’Harnoncourt will be published this fall.