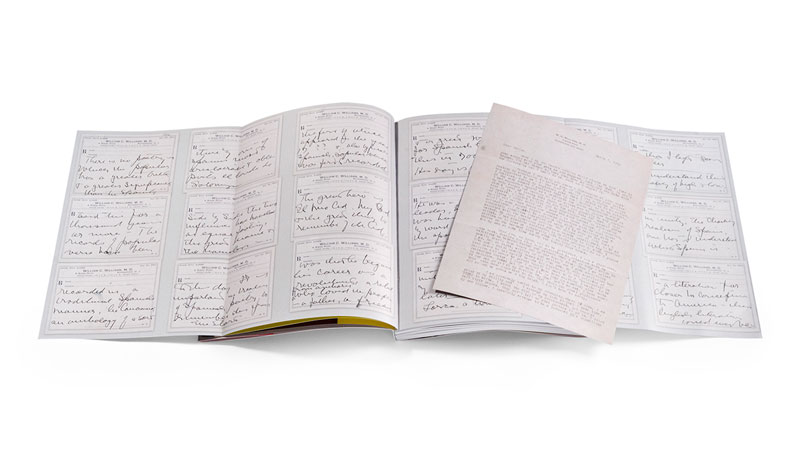 “The mind's the thing, that and the desire. Fifteen minutes is all that is needed to clinch a masterpiece. The first conception of any work comes to me most often when I am most busy at my practice...The ride in a car between patients is filled with imaginings and the more familiar the route, the more humdrum, the more boring, the more the mind is released to its purposes.”—Williams Carlos Williams

The late poet and doctor William Carlos Williams is represented here by never-before-published prescription pads, printed across three four-panel foldouts, containing his notes for poems, plays, and essays jotted down between patient visits, as well as a facsimile reproduction of a 1942 letter Williams wrote to a medical student outlining his decision to become both a doctor and a poet.

From the Williams Carlos Williams Papers, Yale Collection of American Literature, Beinecke Rare Book and Manuscript Library. Reproduced in the issue with the kind permission of the William Carlos Williams Estate. Copyright ©2015 the Estates of Paul H. Williams and William Eric Williams.

William Carlos Williams (1883–1963) was a poet and doctor based in Rutherford, New Jersey. His major works include Kora in Hell (1920), Spring and All (1923), Paterson (1946)—which was honored with the first National Book Award for Poetry in 1950—and Pictures from Brueghel and Other Poems (1962), for which he posthumously received a Pulitzer Prize in 1963. Williams attended the Horace Mann School in Manhattan and the Perelman School of Medicine at the University of Pennsylvania, where he met the poet Ezra Pound. He was, with Pound, one of the principal poets associated with the Imagist movement, eventually parting ways with the group in order to develop a specifically American poetic approach that was less dependent upon European culture and traditions. Considered one of the most prolific American authors of the 20th century, Williams wrote poetry, fiction, plays, epic narratives, and essays.