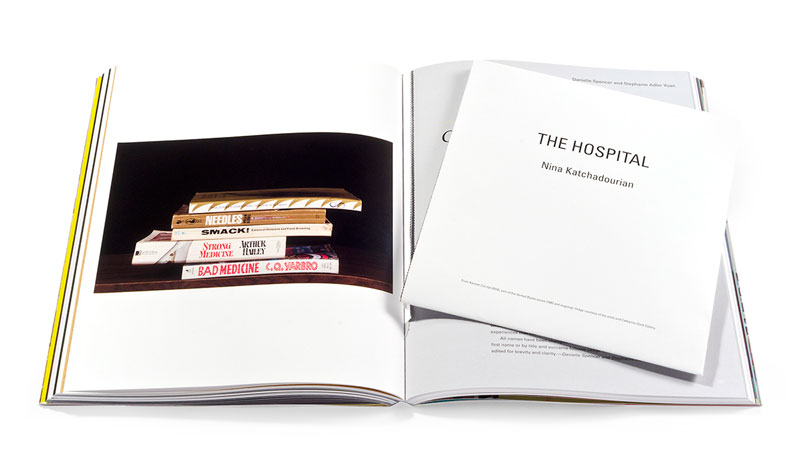 “One day, I gave myself the challenge of constructing a book stack using as many of the medical thrillers as I could. This yielded my tallest stack to date (I had to prop it up with a fire extinguisher), and it tells an imaginary story about a hospital visit gone horribly wrong. According to one of his friends I met while in Kansas, William Burroughs, despite his high threshold for the morbid and the dreadful, had a mortal fear of hospitals.”—Nina Katchadourian

(Originally commissioned by the Lawrence Art Center for the Free State Festival, 2014.)

Nina Katchadourian was raised in Stanford, California, and on the Finnish archipelago. She received her B.A. from Brown University and her M.F.A. from the University of California at San Diego, and she was selected for the Whitney Museum Independent Study Program in 1996. Katchadourian has exhibited at institutions such as MoMA PS1, Serpentine Gallery, and Saatchi Gallery, and her work will be the subject of a solo traveling exhibition in 2016 organized by the Blanton Museum in Austin, Texas. Her publications include Sorted Books (Chronicle, 2013) and All Forms of Attraction, the catalog for her 2006 exhibition at the Francis Young Tang Teaching Museum in Saratoga Springs, New York. The recipient of numerous honors, including a Louis Comfort Tiffany Foundation Award in 2001, Katchadourian is on the faculty of New York University’s Gallatin School of Individualized Study.