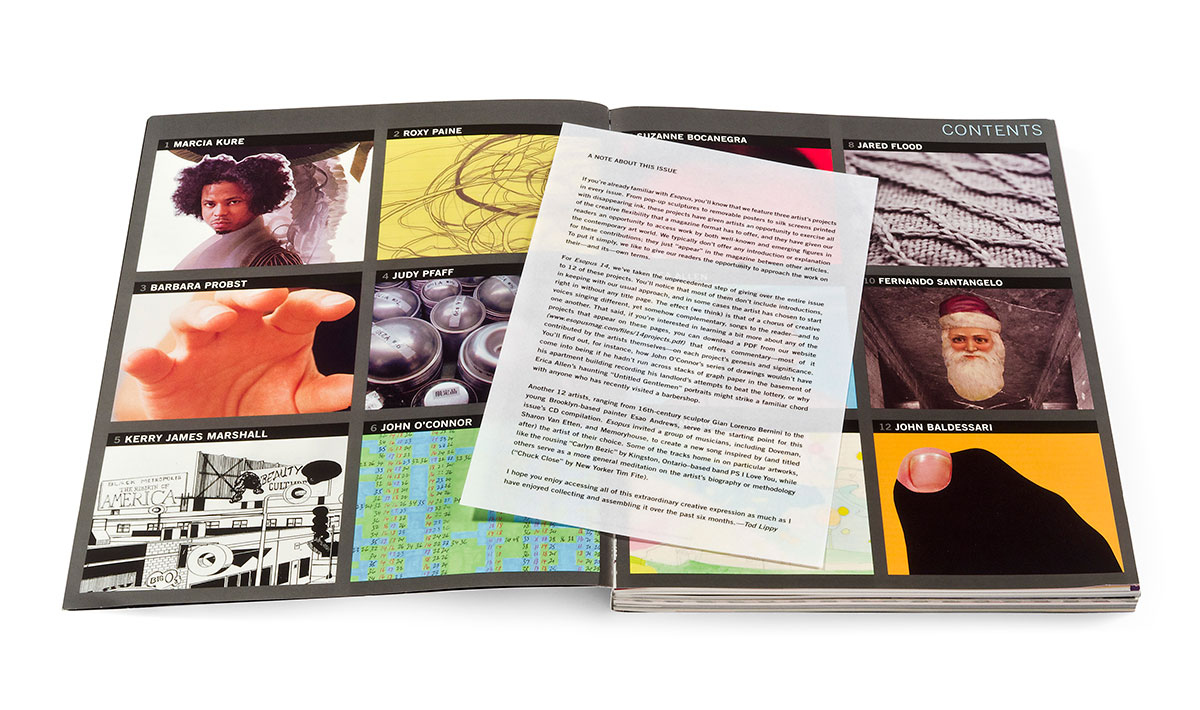 If you’re already familiar with Esopus, you’ll know that we feature three artist’s projects in every issue. From pop-up sculptures to removable posters to silk screens printed with disappearing ink, these projects have given artists an opportunity to exercise all of the creative flexibility that a magazine format has to offer, and they have given our readers an opportunity to access work by both well-known and emerging figures in the contemporary art world. We typically don’t offer any introduction or explanation for these contributions; they just “appear” in the magazine between other articles. To put it simply, we like to give our readers the opportunity to approach the work on their—and its—own terms.

For Esopus 14, we’ve taken the unprecedented step of giving over the entire issue to 12 of these projects. You’ll notice that most of them don’t include introductions, in keeping with our usual approach, and in some cases the artist has chosen to start right in without any title page. The effect (we think) is that of a chorus of creative voices singing different, yet somehow complementary, songs to the reader—and to one another. That said, if you’re interested in learning a bit more about any of the projects that appear on these pages, you can download this PDF that offers commentary—most of it contributed by the artists themselves—on each project’s genesis and significance. You’ll find out, for instance, how John O’Connor’s series of drawings wouldn’t have come into being if he hadn’t run across stacks of graph paper in the basement of his apartment building recording his landlord’s attempts to beat the lottery, or why Erica Allen’s haunting “Untitled Gentlemen” portraits might strike a familiar chord with anyone who has recently visited a barbershop.

Another 12 artists, ranging from 16th-century sculptor Gian Lorenzo Bernini to the young Brooklyn-based painter Esao Andrews, serve as the starting point for this issue’s CD compilation. Esopus invited a group of musicians, including Doveman, Sharon Van Etten, and Memoryhouse, to create a new song inspired by (and titled after) the artist of their choice. Some of the tracks home in on particular artworks, like the rousing “Carlyn Bezic” by Kingston, Ontario–based band PS I Love You, while others serve as a more general meditation on the artist’s biography or methodology (“Chuck Close” by New Yorker Tim Fite).

I hope you enjoy accessing all of this extraordinary creative expression as much as I have enjoyed collecting and assembling it over the past six months.—Tod Lippy