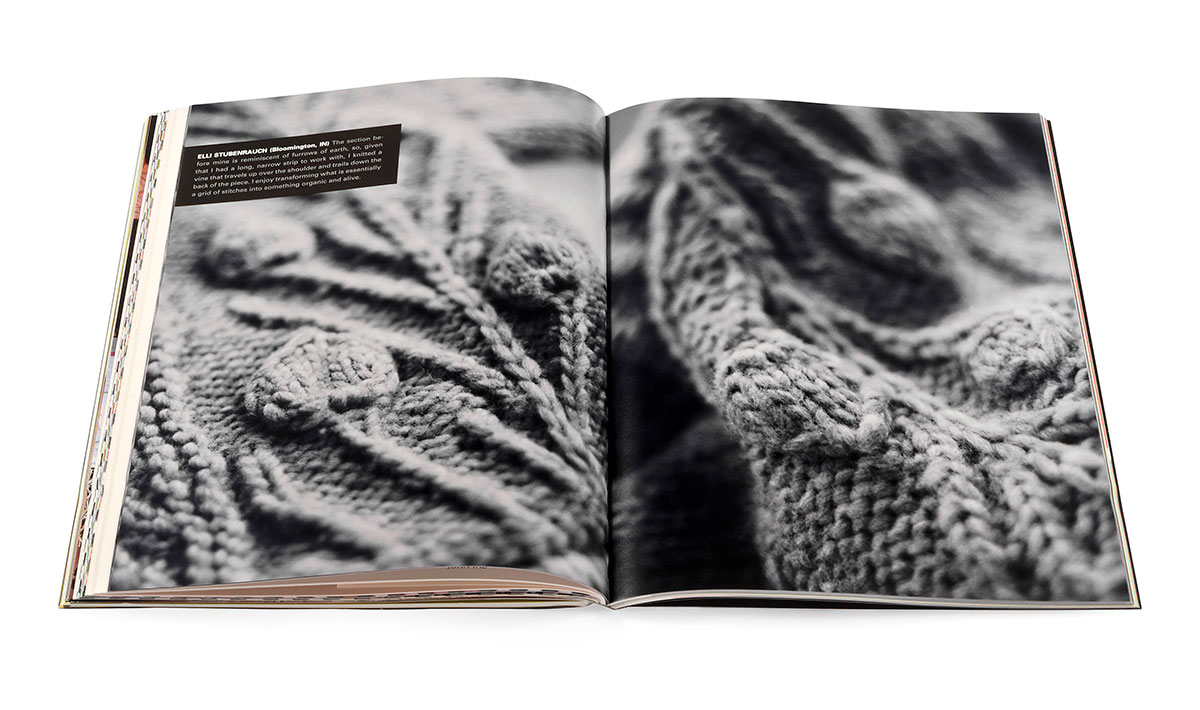 Funding for this project provided by the Coby Foundation

“‘Esprit de Corpse’ documents a design experiment shared by six knitwear designers in six locations. The design process for the garment was modeled after the process Surrealists called The Exquisite Corpse, in which multiple artists create a single image (typically the human figure) in sequence with one another. Each artist is permitted only a glimpse at the contribution of the previous artist without knowing its connection to the whole. For this project, each designer created a single piece of one garment after having been shown only the piece that had been worked by the previous designer. Each new piece was generated in response to (and often directly off of) the work that had been passed on to them. When all parts had been fabricated, they were sewn together to create a finished whole.”—Jared Flood

Connie Chang Chinchio received her undergraduate and graduate degrees in condensed-matter physics. An avid and accomplished knitter, she is currently working in the field of environmental health science. In addition to her patterns for One Planet, her designs have been published in Interweave Knits, Knitscene, and Knitter’s Magazine. She is the author of the blog PhysicsKnits.

Tanis Gray currently serves as the Yarn Editor for Soho Publishing, home to Vogue Knitting, Knit Simple, Knit.1, Debbie Bliss and Sixth & Spring Books, and is the co-editor of Knit.1. Gray has studied under Shirley Paden and has collaborated with world-renowned designer Nicky Epstein. Her work has been featured in many knitting books, as well as in Vogue Knitting, Knit Simple, Knit.1, Adorn, Cutting Edge, A.C. Moore and Martha Stewart Living magazines. Tanis received a Bachelor of Fine Arts in Film, Animation and Video from the Rhode Island School of Design (RISD). After graduating with Honors, she went to New York and worked for Martha Stewart Living Omnimedia, HBO, Focus Features, MTV and Hungry Man Productions prior to joining the Soho Publishing team. Gray enjoys volunteering—she regularly teaches knitting classes at a women's shelter—and led her knit group in the production of Snuggles for local animal shelters.

Carrie Bostick Hoge graduated from Parsons School of Design with a BFA in Photography. She worked in that field for various magazines and photographers before leaving New York City for Portland, Maine, where her interest in knitting began. She started her new career working in the mill for The Fibre Company and also as a stylist for Interweave Knits. Currently, Hoge works for Classic Elite Yarns and also out of Fort Nest, a small studio in her backyard, integrating her knitting, photography, and design interests. She is the force behind the website Madder and the blog Swatch Diaries.

A cartographer by day, knitter Elli Stubenrauch particularly enjoys creating mittens. Her patterns have been featured in Knit.1, Twist Collective, and Vogue Knitting magazines, and her blog about knitting, Elliphantom Knits, can be found at www.elliphantom.com.

Melissa LaBarre is a self-taught knitter and designer from Western Massachusetts. Her designs have been published in Vogue Knitting and Knit.1 as well as in several pattern collections for yarn companies. She recently co-authored her first knitting book, New England Knits, which will be published in Spring 2010 by Interweave Press. She is the creator of the knitting blog Knitting School Dropout.

Jared Flood is a New York–based knitwear designer and photographer. A Pacific Northwest native, Flood holds an M.F.A. from the New York Academy of Art and travels the country teaching traditional hand-knitting technique and garment construction. His pattern designs and writings have been featured in Interweave Knits, Vogue Knitting, Knit.1, and Spin Off (Interweave Press) as well as other print and online sources. Flood’s photography has been featured in Good Housekeeping, New York magazine, Vogue Knitting, The Knitter, and a number of books and online publications. He is the author of Made in Brooklyn, a collection of original hand-knitting designs utilizing natural fibers, distributed by Classic Elite Yarns.