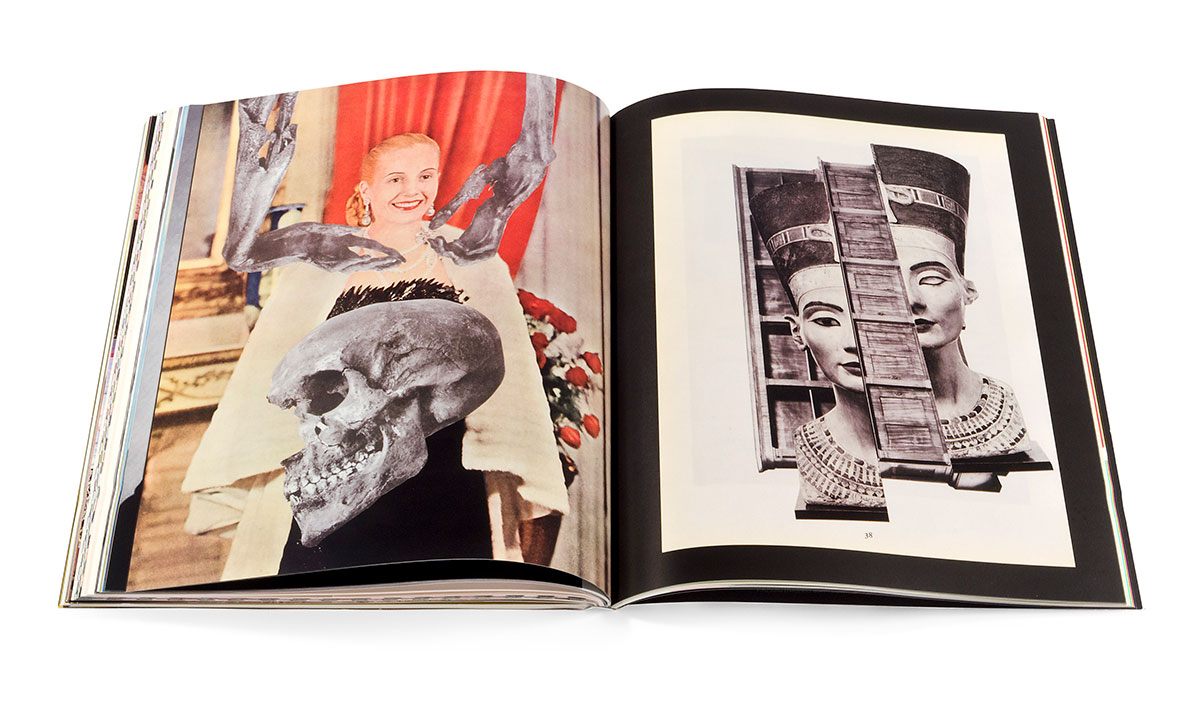 “Putting these collages together is almost a divination. All of the cutouts are like Tarot cards and the combinations that fall on the table make the narrative. That I read any story into it is totally a subjective interpretation—just as a card reader creates a story based on the position of one card next to the other. The only difference is that once the cutouts make sense I glue them down, whereas the reader just puts the cards back in the deck. I have been fascinated with movies about Egyptian tombs for as long as I can remember. Over the years I have collected as many books on the subject as I can find, particularly those which feel like they’ve been kept in a drawer for a long time—with faded, even damaged, images. Out of these I’ve managed to construct a story in which neglectful parents have sent their children off to play in a great pyramid, which is accessible to them through a small hole in the wall that only a child or doll could fit through. The children, left to their own devices, create a new order inside this labyrinth, populated by goose-stepping mummies and frenetic characters. To me, it’s a world filled with the thrills—and horrors—that come from unexpected freedom.”—Fernando Santangelo

Fernando Santangelo was born in Montevideo, Uruguay, where he learned to paint and dreamed of one day becoming an archaeologist. After moving to New York City in 1982, he began creating art installations and temporary decors for the clubs of restaurateur and nightlife impresario Eric Goode. These caught the eye of hotelier André Balazs, who hired Santangelo to redesign the Chateau Marmont Hotel, the 1920s landmark on Sunset Boulevard in Los Angeles. The renovated “Chateau” enjoyed tremendous acclaim, leading Santangelo to open his own design firm, Fernando Santangelo Interiors, in 1995. His clients since have included the Raleigh Hotel in Miami’s South Beach and Lehman Maupin Gallery in New York City. Santangelo’s work appears frequently in the pages of World of Interiors, Interior Design, Elle Decor, and The New York Times Magazine.