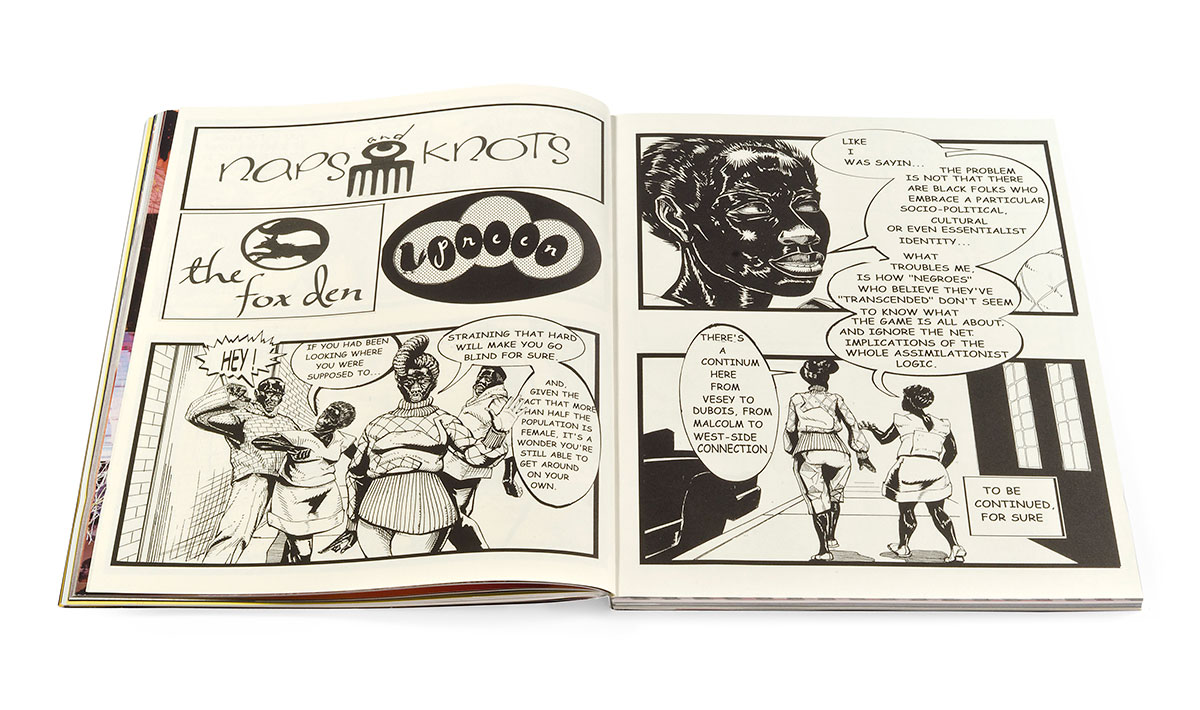 “The Rythm Mastr project has been under development since 1999, first as an installation, then as a conceptual project titled Dailies comprising three cartoon strips: Rhythm Mastr, P-Van-, and On The Stroll. These overlapping comics all take place in ‘Black Metropolis’—the long dreamed-of capital of the ‘Black World’—and are written in Black vernacular English. The comics form provides a vehicle for talking about all manner of subjects. The use of a ‘Black speech’ inflection to talk about theory, history, and culture short-circuits anti-intellectual assumptions that usually attach to people who use ‘ebonics.’”—Kerry James Marshall

Kerry James Marshall was born in Birmingham, AL, in 1955 and grew up in the South Central and Watts neighborhoods of Los Angeles in the 1960s. Marshall earned a B.F.A. in 1978 and an honorary doctorate in 1999 from the Otis Art Institute in Los Angeles, where he studied under Charles White and Arnold Mesches. His paintings, sculpture, and installations have been exhibited at the Art Institute of Chicago, the Berlinische Galerie in Berlin, and MASS MoCA in North Adams, MA, and they reside in the permanent collections of the Whitney Museum of American Art in New York, the Museum of Contemporary Art in Chicago, and the Los Angeles County Museum of Art, among others. He has also worked as a production designer for such films as Daughters of the Dust (1989) and taught at the School of Art and Design at the University of Illinois at Chicago. Marshall has received a MacArthur Fellowship, a National Endowment for the Arts Visual Arts Fellowship, and a Wexner Center Residency Award. He currently lives and works in Chicago, IL.