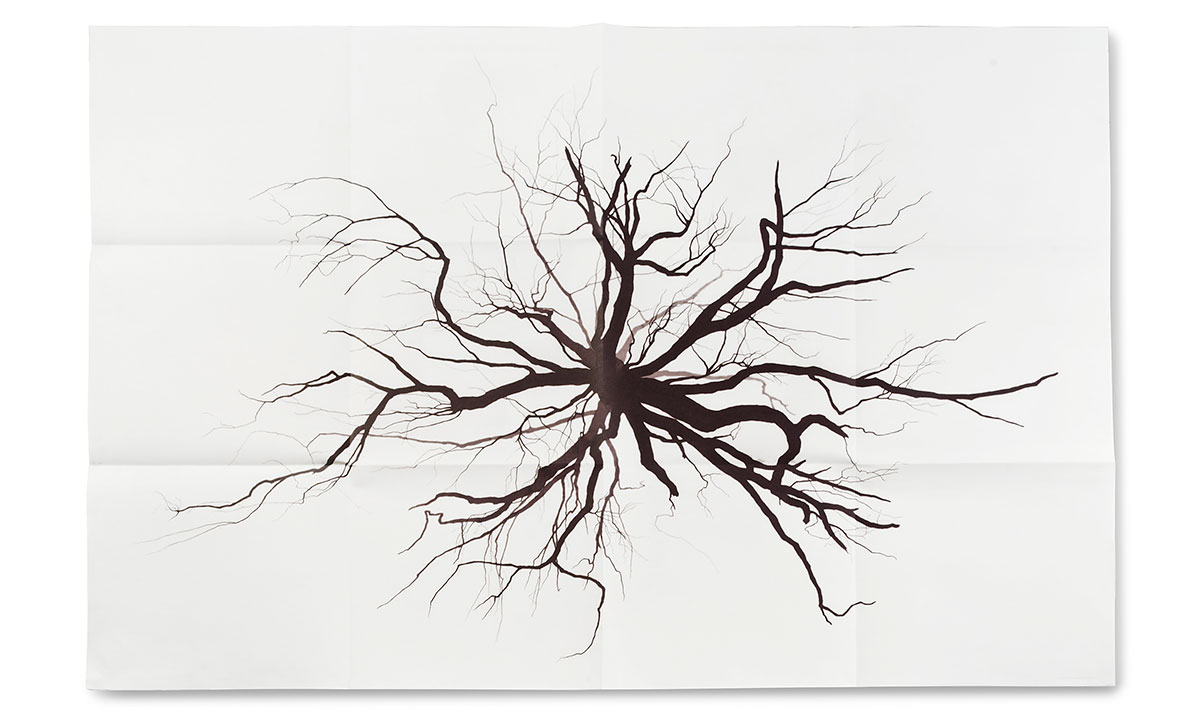 “These drawings reflect an abiding interest in not only tree structures but also a synthesis of several different dendritic systems: nervous, vascular, lightning, river networks, process pipelines. I am interested in the flow of these forms throughout space and the intrinsic purpose that the systems share: transmission of energy or materials. My subject matter comes from trying to understand the foibles, flaws, and fragility of humans and how these represent themselves in our relationship to the outside world, to the natural world, to the universe at large. The processes that the work undergoes depends on the project, but one commonality to all the works is a first drawing, which is the purest evocation of the idea: a germ, a seed, a genetic blueprint. Next in the process is a fermentation, where I put the drawing away for six months or a year, and then it sits fermenting either into a ‘complex cheese’ or a putrid mess. This functions as a kind of first proofing: If the idea is still compelling after that period, I will make a more articulated drawing which leads to a second proofing. In this way, I am able to weed out ideas which are of only temporal interest or which will not produce a tasty cheese. I am interested in ideas of potential. Of art as something which is in a transitional state that reaches its final form in the mind of both the artist and the viewer.”—Roxy Paine

Roxy Paine was born in 1966 in New York and studied at both the College of Santa Fe in New Mexico and Pratt Institute in New York. Since 1990, his work has been internationally exhibited and is included in the collections of the Museum of Modern Art, the Hirshhorn Museum and Sculpture Garden in Washington, D.C., the Israel Museum in Jerusalem, the San Francisco Museum of Modern Art, and the Whitney Museum of American Art. His large-scale sculptures can be found at various museums and foundations, including Seattle’s Olympic Sculpture Park, the Wanas Foundation in Knislinge, Sweden, and the St. Louis Museum of Art. His most recent site-specific sculpture, Maelstrom, was installed on the roof of the Metropolitan Museum of Art in 2009. Represented by James Cohan Gallery, Paine lives and works in Brooklyn and Treadwell, NY.