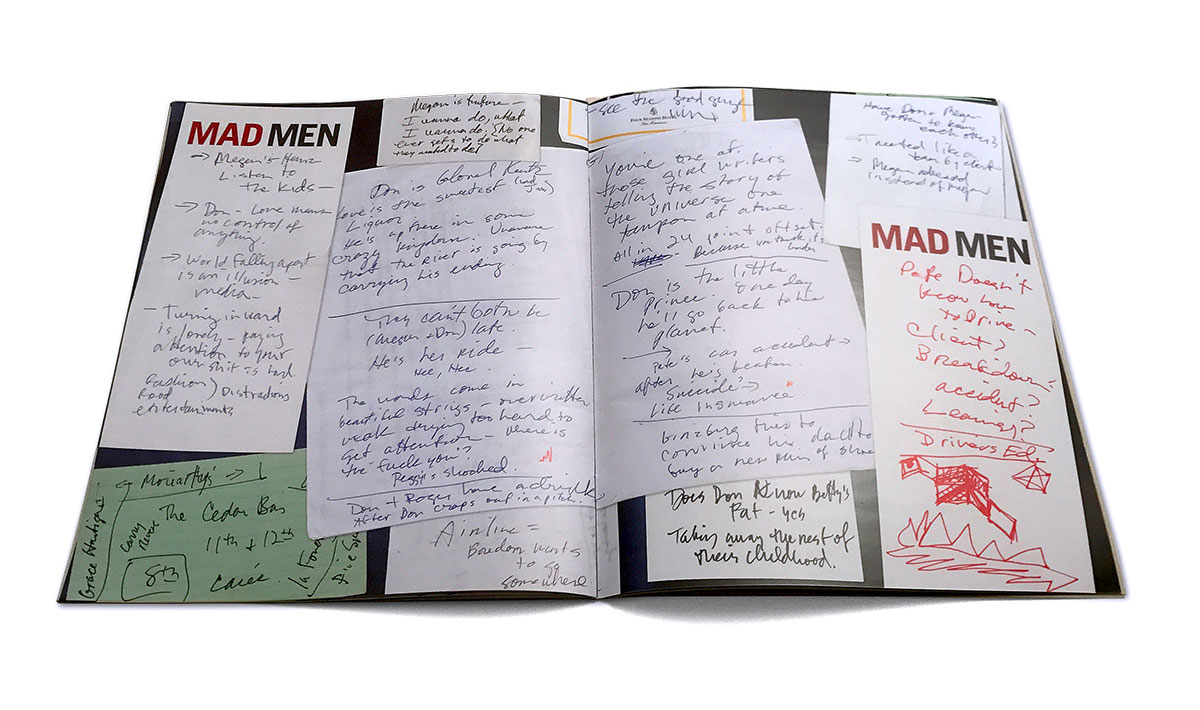 “Most of these notes were jotted down on the run, or at a party, or in the car. For instance, there’s a used envelope in here with a bunch of stuff written in red: That’s the conversation from the end of the Season 5 premiere [“A Little Kiss”] where the agency hires the black secretary. We couldn’t figure out how to do it, and it suddenly came to me while I was making French toast one Saturday morning for my children, so I just wrote all of the dialogue down on that envelope.”—Matthew Weiner

Mad Men creator Matthew Weiner has spent the past eight years jotting down countless notes—on the backs of envelopes, hotel stationery, and anything else in reach when an idea strikes him—that have since been incorporated into his award-winning TV series. Reproduced here for the first time over 28 pages (along with a removable insert), they represent successful attempts to capture, in Weiner’s words, “the fleeting thought that turns out to be inspiration.”

Matthew Weiner is a writer, director, producer, and the creator of the critically acclaimed AMC television drama series Mad Men. He also worked as a writer and producer for the HBO series The Sopranos during its fifth and sixth seasons, and previously served as a writer for several other TV shows, including The Naked Truth, Becker, and Andy Richter Controls the Universe. Weiner has received nine Primetime Emmy Awards for his work on Mad Men and The Sopranos; Mad Men has also received three consecutive Golden Globe Awards for Best Television Drama Series; three Producers Guild Awards; a Peabody Award; six Writers Guild Awards; two BAFTA Awards; the 2008 Royal Television Society Award for International Program; and five Television Critics Association Awards, including Program of the Year. In 2011, Weiner was named one of Time magazine’s “100 Most Influential People in the World.” A graduate of Wesleyan University, Weiner earned his M.F.A. from the University of Southern California’s School of Cinema and Television, where he returned to teach an undergraduate screenwriting class on feature rewriting during the fall 2004 semester. He currently resides in Los Angeles with his wife, architect Linda Brettler, and their children. Weiner’s first feature film, You Are Here, premiered at the 2013 Toronto International Film Festival.