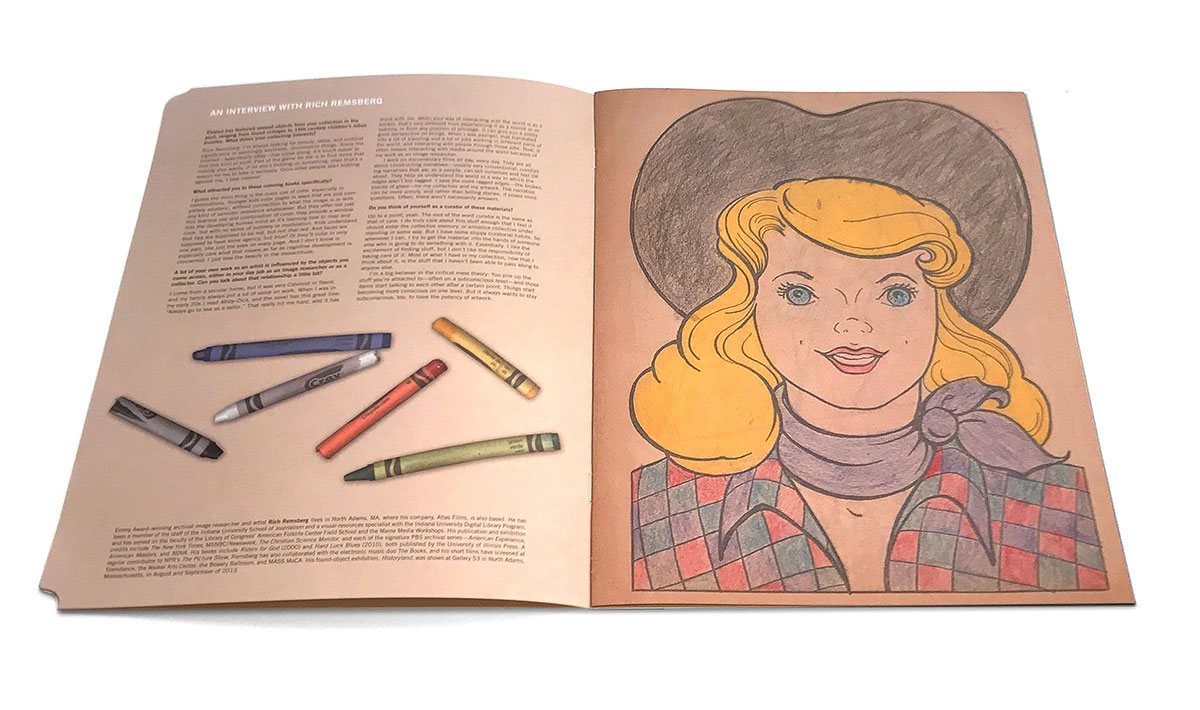 “Younger kids color pages in ways that are just completely aleatoric, without connection to what the image is or with any kind of semiotic relevance whatsoever. But they offer not just this fearless use and combination of color; they provide a window into the developing human mind as it’s learning how to map and code, but with no sense of subtlety or modulation. Kids understand that lips are supposed to be red, but not that red.”—Rich Remsberg

Archivist, photo researcher, and regular Esopus contributor Rich Remsberg is drawn to “the beauty, value, and cultural significance in seemingly worthless, dismissable things.” What better source to draw from than discarded children’s coloring books? Featured in the issue are a series of examples from Remsberg’s cache of often funny, sometimes beautiful, and consistently uncanny images.

Emmy Award–winning archival image researcher and artist Rich Remsberg lives in North Adams, MA, where his company, Atlas Films, is also based. He has been a member of the staff of the Indiana University School of Journalism and a visual-resources specialist with the Indiana University Digital Library Program, and has served on the faculty of the Library of Congress’ American Folklife Center Field School and the Maine Media Workshops. His publication and exhibition credits include The New York Times, MSNBC/Newsweek, The Christian Science Monitor, and each of the signature PBS archival series—American Experience, American Masters, and NOVA. His books include Riders for God (2000) and Hard Luck Blues (2010), both published by the University of Illinois Press. A regular contributor to NPR’s The Picture Show, Remsberg has also collaborated with the electronic music duo The Books, and his short films have screened at Slamdance, the Walker Arts Center, the Bowery Ballroom, and MASS MoCA. His found-object exhibition, Historyland, was shown at Gallery 53 in North Adams, Massachusetts, in August and September of 2013.