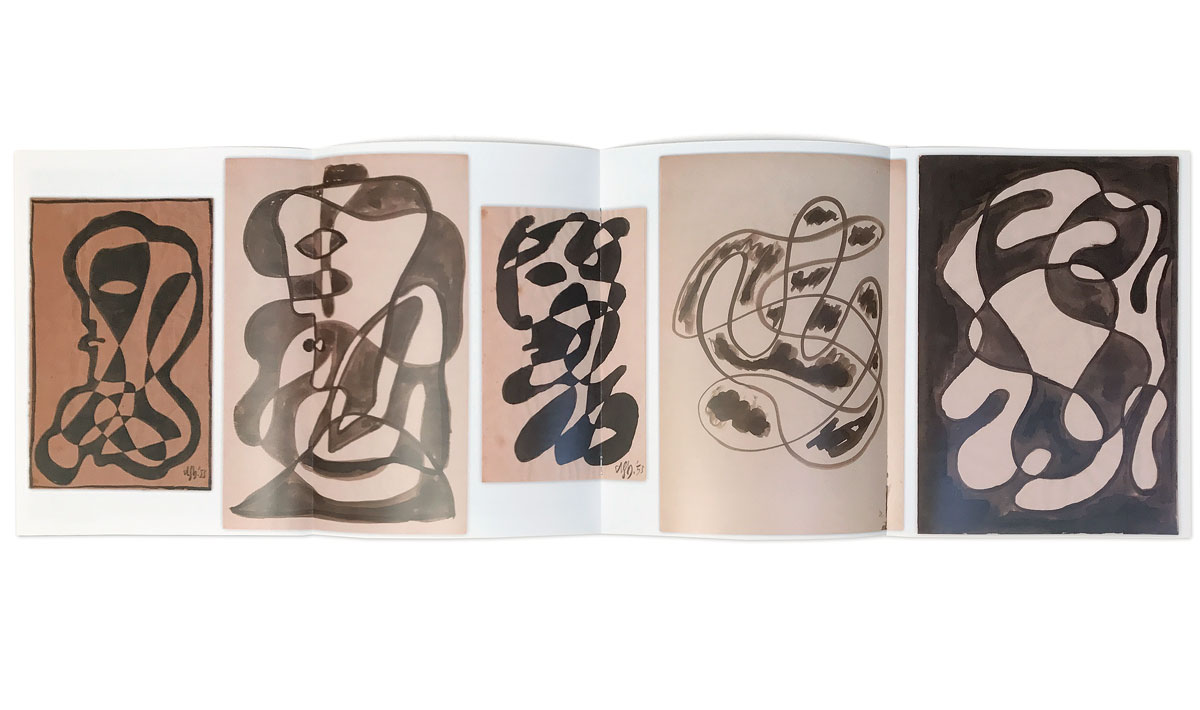 “Houédard discovered concrete poetry in the early ’60s and started corresponding with one of the movement’s founders, Eugen Gomringer. At that point, he decided, in his little Benedictine monk cell, to type on his portable Olivetti 22. As far as I know, no one showed him how to compose these typewritings; he figured it all out by himself.”—Marvin Sackner

Marvin and Ruth Sackner established their archive of Concrete and Visual Poetry in 1979; in the ensuing years, it has become the largest private archive of its kind in the world. That same year, the two of them came across the work of the Benedictine monk, theologian, and poet Dom Sylvester Houédard and were immediately entranced by what they saw. They've since amassed more than 1,600 artworks and manuscript materials. The selection shown here ranges from Houédard's well-known "typestracts" to a series of drawings from the early ’50s that have never been seen by the public.

Dom Sylvester Houédard was born in 1924 in the Channel Islands and moved to England in his teens. In 1942, he began a degree in modern history at Oxford University, but interrupted his studies to do military service, working as an intelligence officer in Asia. After graduating from Oxford in 1949, he joined the Benedictine community at Prinknash Abbey in rural Gloucestershire, and was ordained as a Catholic priest in 1959. Encouraged by his abbot, Wilfrid Upson, Houédard was able to pursue both his passion for the arts and his interest in different faiths and belief systems. By the early 1960s, he had begun creating visually abstract and stunning concrete poems on his typewriter called “typestracts.” As he became more involved with the concrete poetry movement, Houédard involved himself with multiple collaborative projects and cofounded Openings Press in 1964 with graphic designer and artist John Furnival in order to publish books specifically on concrete poetry. He also contributed what is thought to be the first essay on concrete poetry in the U.K., “Concrete Poetry and Ian Hamilton Finlay,” in the December 1963 issue of Typographica. By the late ’60s, Houédard was exhibiting his work internationally, and he was the subject of a solo show at the Victoria and Albert Museum in London in 1971. Houédard also wrote extensively on new approaches to art, spirituality, and philosophy and participated actively in the Vatican’s efforts to modernize Catholicism by forging links with other religions. He passed away in 1992.

In 1979, Marvin and Ruth Sackner founded the Sackner Archive of Concrete and Visual Poetry, which is the world’s largest private collection of concrete and visual poetry from 20th-century art movements. The archive holds more than 60,000 objects and includes works from movements such as Italian Futurism, the Russian and Eastern European avant-garde, Dada, Surrealism, Bauhaus, De Stijl, Ultra, Tabu-Dada, Lettrisme, Ultra-Lettrisme, Fluxus, Transfuturism, and Inism. In addition to critical texts, periodicals, ephemera, prints, drawings, collages, paintings, sculptures, objects, manuscripts, and correspondence, the collection includes a wide variety of artists’ books, typewriter art, performance and sound poetry, stamp art, ’zines, and micrography. In 1986, the Sackners published the Ruth and Marvin Sackner Archive of Concrete and Visual Poetry Catalog, which is now out of print; in 1992, Marvin Sackner authored The Beauty in Breathing: Selections from the Ruth and Marvin Sackner Archive of Concrete and Visual Poetry, published by the American Lung Association. The Archive, which is based in Miami, has lent work to various museums, including the Los Angeles County Museum of Art; the Museum of Modern Art, New York; Palais de Tokyo, Paris; and Reina Sofia, Madrid; it has also exhibited work at a wide variety of galleries and museums around the country since 1982. From December 4, 2013, to May 25, 2014, selections from the Archive will be exhibited at the Perez Art Museum, Miami, in the exhibition A Human Document: Selections from the Sackner Archive of Concrete and Visual Poetry.