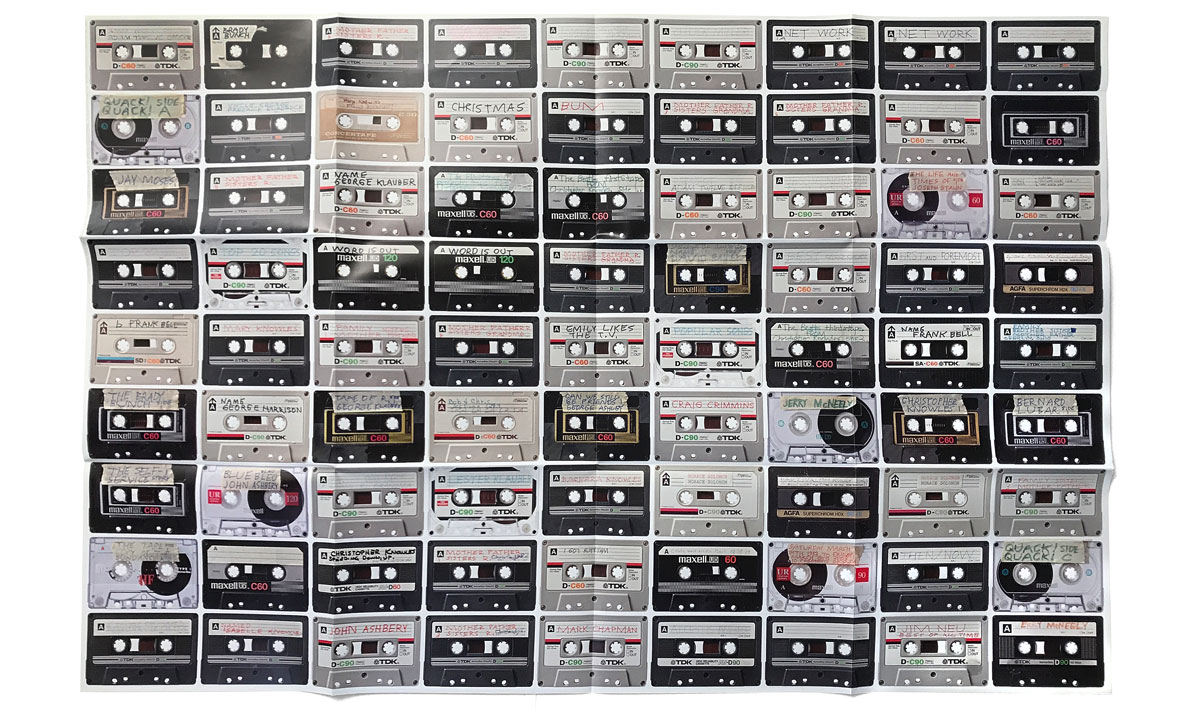 ”I’m curious to know what transcriptions of these tapes would look like on a page. That’s what Bob Wilson said he was picking up on when he first heard ‘Emily Likes the TV’—he could sense a structure and ‘patterned rhythm’ to the work. Ultimately it became clear to me that Christopher quite likely has a complete visual picture in his mind before he embarks on executing a piece of work—in his typings as well as in his paintings”—Janine St. Germain

From the archives of Christopher Knowles, we offer a 23 x 37" removable poster featuring a selection of cassette tapes made by the artist and poet from the early ’70s (when he was barely a teenager) through the ’80s. They are an amazing documentation of Knowles’s inner world at an age when he was involved with performing, traveling, and collaborating with an extraordinary range of friends and artists. (Four of the recordings are also featured on the Esopus 20 CD.)

New York native Christopher Knowles has been exhibiting his artwork and participating in readings and performances incorporating his poetry since his teens in the early ’70s. Diagnosed with sustained brain damage as a child from toxoplasmosis, he is perhaps best-known for his text-based “typings,” in which he organizes texts, ranging from lists of top-10 pop songs to single words, into intricate red, black, or green patterns using an electric typewriter. Knowles has also created a significant amount of tape recordings consisting of rhythmically, mathematically, and visually organized poems, often involving repeated variations on a word or phrase. When Knowles was 13, one of his audiotapes was given to avant-garde theater director and playwright Robert Wilson, who invited the teenager to perform in his 1973 production of The Life and Times of Joseph Stalin; Wilson subsequently asked Knowles to contribute text for the libretto of the seminal Wilson/Philip Glass opera Einstein on the Beach (1976), and Wilson and Knowles have maintained a close collaborative partnership ever since. Knowles has had solo exhibitions of his work at venues including Gavin Brown’s Enterprise, New York; Galerie Martin Janda, Vienna; the Holly Solomon Gallery, New York; The Kitchen, New York; and the Museum Boymans-Van Beuningen in the Netherlands. He has also participated in group exhibitions at the Museum of Modern Art, New York; the Institute of Contemporary Art, London; Exit Art, New York; Tate Modern, London; and the Musée Galliera, Paris. His poetry has appeared in many publications and anthologies, including The Village Voice, The New Yorker, and Ear magazine. Knowles will perform his piece The Sundance Kid Is Beautiful at the Musée du Louvre in Paris, France, later this year.

Janine St. Germain is a consulting archivist who continues to work with the archives of artists’ estates and individual collectors as well as with those of nonprofit and corporate institutions. She is currently organizing the archives of the late husband of Adelaide de Menil, Edmund Snow Carpenter, and the archives of the International Rescue Committee, a humanitarian/international relief organization established by Albert Einstein.