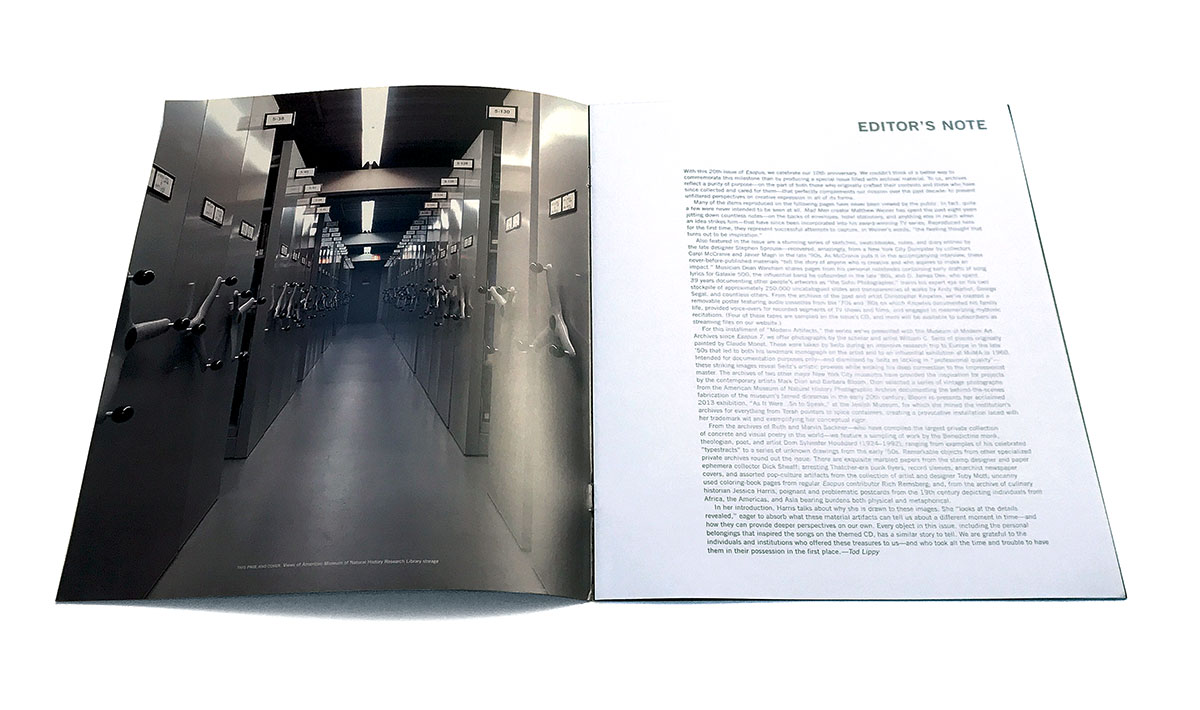 With this 20th issue of Esopus, we celebrate our 10th anniversary. We couldn’t think of a better way to commemorate this milestone than by producing a special issue filled with archival material. To us, archives reflect a purity of purpose—on the part of both those who originally crafted their contents and those who have since collected and cared for them—that perfectly complements our mission over the past decade: to present unfiltered perspectives on creative expression in all of its forms.

Many of the items reproduced on the following pages have never been viewed by the public. In fact, quite a few were never intended to be seen at all. Mad Men creator Matthew Weiner has spent the past eight years jotting down countless notes—on the backs of envelopes, hotel stationery, and anything else in reach when an idea strikes him—that have since been incorporated into his award-winning TV series. Reproduced here for the first time, they represent successful attempts to capture, in Weiner’s words, “the fleeting thought that turns out to be inspiration.”

Also featured in the issue are a stunning series of sketches, swatchbooks, notes, and diary entries by the late designer Stephen Sprouse—recovered, amazingly, from a New York City Dumpster by collectors Carol McCranie and Javier Magri in the late ’90s. As McCranie puts it in the accompanying interview, these never-before-published materials “tell the story of anyone who is creative and who aspires to make an impact.” Musician Dean Wareham shares pages from his personal notebooks containing early drafts of song lyrics for Galaxie 500, the influential band he cofounded in the late ’80s, and D. James Dee, who spent 39 years documenting other people’s artworks as “the Soho Photographer,” trains his expert eye on his own stockpile of approximately 250,000 uncatalogued slides and transparencies of works by Andy Warhol, George Segal, and countless others. From the archives of the poet and artist Christopher Knowles, we’ve created a removable poster featuring audio cassettes from the ’70s and ’80s on which Knowles documented his family life, provided voice-overs for recorded segments of TV shows and films, and engaged in mesmerizing rhythmic recitations. (Four of these tapes are sampled on the issue’s CD, and more will be available to subscribers as streaming files on our website.)

For this installment of “Modern Artifacts,” the series we’ve presented with the Museum of Modern Art Archives since Esopus 7, we offer photographs by the scholar and artist William C. Seitz of places originally painted by Claude Monet. These were taken by Seitz during an intensive research trip to Europe in the late ’50s that led to both his landmark monograph on the artist and to an influential exhibition at MoMA in 1960. Intended for documentation purposes only—and dismissed by Seitz as lacking in “professional quality”—these striking images reveal Seitz’s artistic prowess while evoking his deep connection to the Impressionist master. The archives of two other major New York City museums have provided the inspiration for projects by the contemporary artists Mark Dion and Barbara Bloom. Dion selected a series of vintage photographs from the American Museum of Natural History Photographic Archive documenting the behind-the-scenes fabrication of the museum’s famed dioramas in the early 20th century; Bloom re-presents her acclaimed 2013 exhibition, “As It Were...So to Speak,” at the Jewish Museum, for which she mined the institution’s archives for everything from Torah pointers to spice containers, creating a provocative installation laced with her trademark wit and exemplifying her conceptual rigor.

From the archives of Ruth and Marvin Sackner—who have compiled the largest private collection of concrete and visual poetry in the world—we feature a sampling of work by the Benedictine monk, theologian, poet, and artist Dom Sylvester Houédard (1924–1992), ranging from examples of his celebrated “typestracts” to a series of unknown drawings from the early ’50s. Remarkable objects from other specialized private archives round out the issue: There are exquisite marbled papers from the stamp designer and paper ephemera collector Dick Sheaff; arresting Thatcher-era punk flyers, record sleeves, anarchist newspaper covers, and assorted pop-culture artifacts from the collection of artist and designer Toby Mott; uncanny used coloring-book pages from regular Esopus contributor Rich Remsberg; and, from the archive of culinary historian Jessica Harris, poignant and problematic postcards from the 19th century depicting individuals from Africa, the Americas, and Asia bearing burdens both physical and metaphorical.

In her introduction, Harris talks about why she is drawn to these images: She “looks at the details revealed,” eager to absorb what these material artifacts can tell us about a different moment in time—and how they can provide deeper perspectives on our own. Every object in this issue, including the personal belongings that inspired the songs on the themed CD, has a similar story to tell. We are grateful to the individuals and institutions who offered these treasures to us—and who took all the time and trouble to have them in their possession in the first place.—Tod Lippy