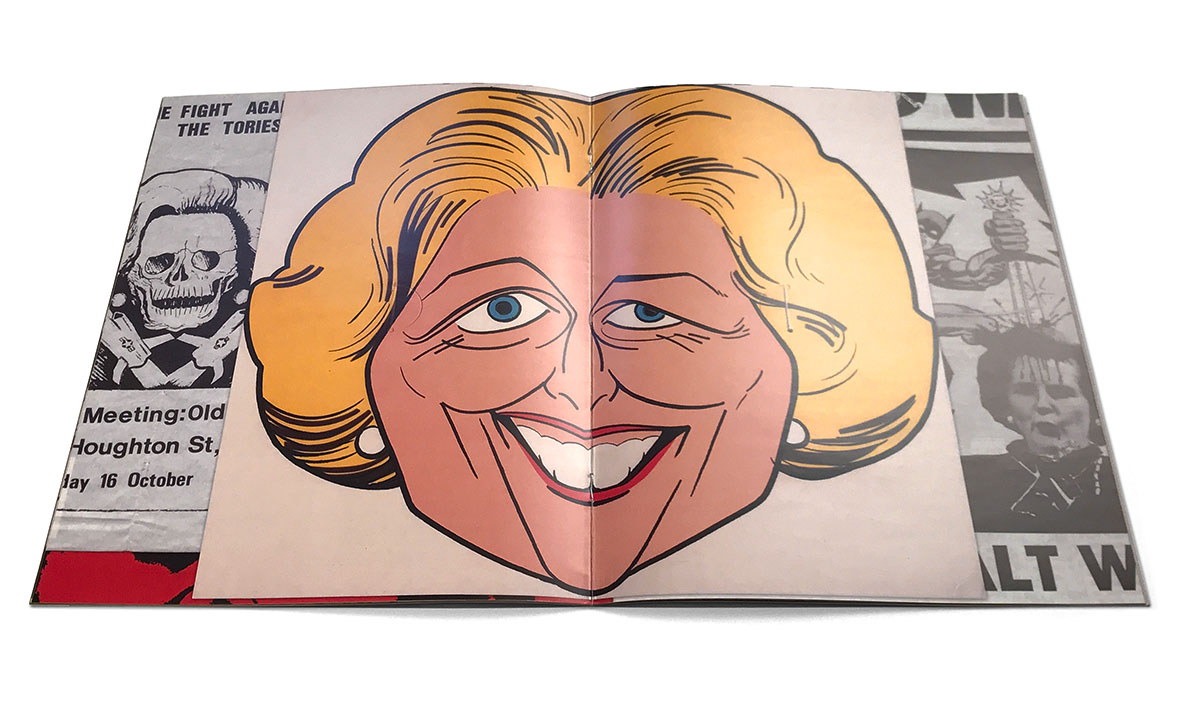 “It’s odd looking at this stuff, because she’s depicted almost like a mannequin—a caricature. The only other British leader I can think of who is treated similarly, but in a positive way, is Winston Churchill. Not that I sympathized with her much, but I don’t think the way she is depicted, as the “Iron Lady’—this kind of stern schoolteacher or evil mother—related to who she actually was as a person. I don’t know, maybe I’m giving her more of a conscience than she had.”—Toby Mott

When Margaret Thatcher was elected prime minister in Great Britain in 1979, 15-year-old Toby Mott was already a self-identified anarchist punk. Like many of his friends, he collected numerous anti-Thatcher flyers, posters, newspapers, and pop-culture artifacts, and these materials formed the basis of The Mott Collection, his archive of thousands of materials related to punk culture in the UK and beyond. Here, we present a selection of items, including a removable insert, that bring to life a polarizing—and, at least for many artists and activists, stimulating—chapter in British history.

British artist, designer, historian, and collector Toby Mott studied art at Westminster Kingsway College before becoming a founding member of the Anarchist Street Army (ASA) in the late ’70s. He was also a cofounder of the East London art group the Grey Organisation (GO), which participated in over 20 international exhibitions before its dissolution in 1991. Mott, who appeared in films by British director Derek Jarman as well as in artworks by Gilbert & George, worked as an art director for MTV in the ’80s and ’90s, making music videos for groups such as Public Enemy and The Rolling Stones, and he designed album covers for the groups Information Society and De La Soul. Mott has exhibited his artwork at White Columns, New York; Thomas Solomon’s Garage, Los Angeles; and Interim Art, London, among other venues. An avid collector of punk rock memorabilia since the late ’70s, Mott has assembled The Mott Collection, an archive of British punk rock and political ephemera that includes over 1,000 posters, flyers, and fanzines. The collection has been exhibited around the world and is the subject of several publications, including Loud Flash: British Punk on Paper (Haunch of Venison, 2010) and American Hardcore 1978–1990 (Ditto Press, 2013). Mott is also the force behind the fashion brand Toby Pimlico, which was launched at London Fashion Week in 1998.