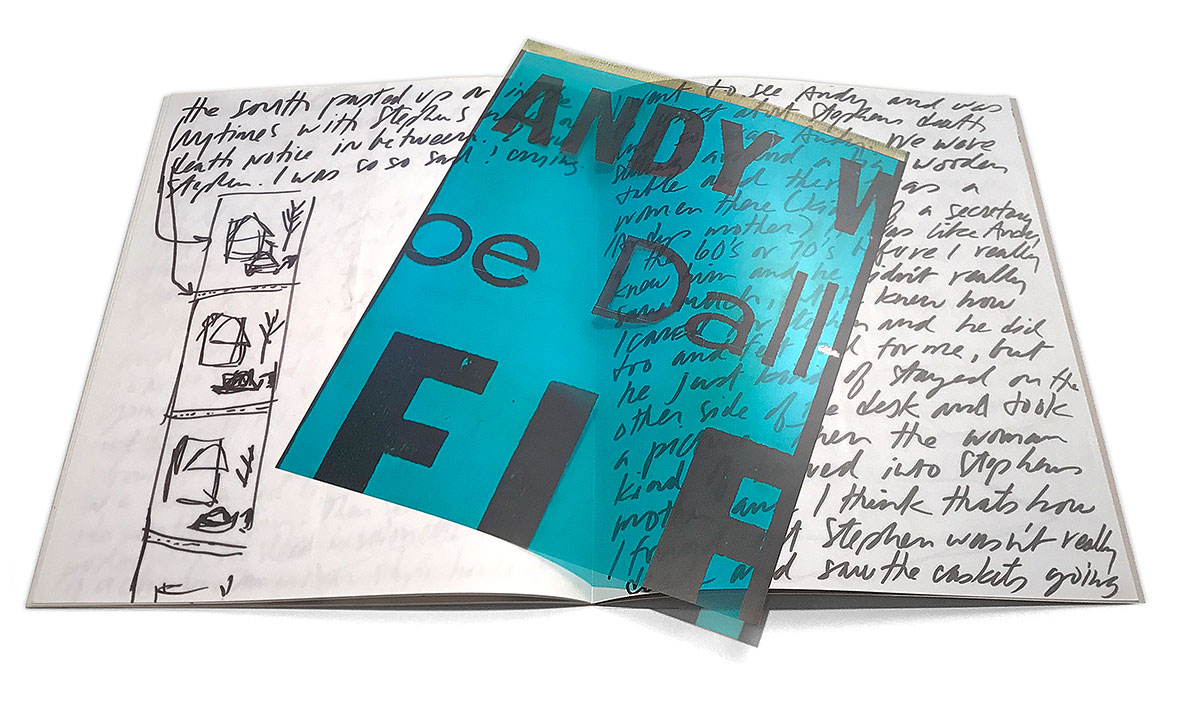 ”Having gone through all of this material time and time again, I’ve made some discoveries. It provides such insight into the way Sprouse thought at the very beginning of his journey here in New York. It really is the story of anyone who is creative and who aspires to make an impact. So that was meaningful to me, especially to see from the materials that nothing was easy for him.”—Carol McCranie

Stephen Sprouse took the fashion world by storm in the ’80s with his vibrant miniskirts, dresses, and coats for women that mixed high (a taste for exquisite materials and elegant cuts) with low (using everything from xeroxes of bullets and barbwires to Day-Glo paints as materials). When Carol McCranie happened upon a stash of the late designers' notebooks, sketches, and inspiration materials in the unlikeliest of places—a Meatpacking-district Dumpster—she couldn't believe her luck. In the ensuing years, McCranie and her husband, Javier Magri, have built upon that original find to establish an archive of Sprouse's work that now numbers nearly 1,500 items. Reproduced here is a sampling—including a removable transparent foldout (for subscribers only)—that offers unparalleled perspectives on Sprouse's process, ambition, and prodigious talent.

Stephen Sprouse burst upon the fashion scene in the 1980s with his dynamic mix of punk rock, wild-style graffiti, and street-influenced fashion characterizing the downtown New York community of that era. Born in Ohio in 1953, Sprouse was interested in fashion as a young boy and visited New York at the age of 12 with his father to meet with several designers, including Bill Blass, who took on Sprouse as a summer intern two years later. When he was 18, he dropped out of the Rhode Island School of Design and came to New York to work for Halston. After three years with the legendary designer, Sprouse moved to the Bowery and immersed himself in New York’s thriving downtown music and art scenes. He met Deborah Harry, the lead singer of the punk band Blondie, and began designing clothes for Harry’s stage shows and music videos, which ultimately led to his first women’s ready-to-wear collection in 1983. Sprouse’s punk-inspired miniskirts, dresses, and coats, infused with bold fluorescent colors and covered by hand-lettered graffiti, were a resounding success: His first several collections were picked up by retailers such as Henri Bendel and Bergdorf Goodman and usually sold out in a matter of days. In 1987, Sprouse opened a three-level store in Manhattan’s SoHo neighborhood and a smaller store in Los Angeles’s Beverly Center while continuing to collaborate with artists and musicians such as Andy Warhol, Keith Haring, and the New Wave band Duran Duran. However, both stores closed in 1989, due in large part to the high cost of his outsourcing production of custom-dyed textiles to the renowned Italian manufacturer Agnona. For the rest of his career, Sprouse experienced a similar series of financial setbacks interspersed with creative breakthroughs: He designed a line of clothing in 1992 exclusively for Bergdorf Goodman, and another in 1995 for Barneys New York. He served as the costume curator for Cleveland’s Rock and Roll Hall of Fame in 1995, presented a well-regarded collection at the 1997 New York Fashion Week, and created a sensation in 2000 with his signature graffiti handbag line for Louis Vuitton. Sprouse’s last formal business venture was his “AmericaLand” collection of red, white, and blue graffiti-printed apparel for the Target retail chain in 2002. The following year, Sprouse was diagnosed with lung cancer; he died on March 4, 2004, at the age of 50.

Carol McCranie was born in Beaufort, South Carolina, and raised in southern Georgia; she earned her B.A. from Agnes Scott College while participating in Atlanta’s punk and New Wave scenes. Originally from Baranquilla, Colombia, Javier Magri met McCranie while both were students at Parsons The New School for Design; the couple married in 1993. McCranie worked for many years as an art dealer, while Magri established himself as an antiquarian book dealer with specialties in anonymous photography and artistic and literary archives. Since the late ’80s, they have been collecting contemporary art, including works by Jean-Michel Basquiat, Andy Warhol, Richard Prince, George Condo, Robert Frank, Dash Snow, Rashid Johnson, William Eggleston, Richard Aldrich, and Martin Kippenberger. The couple also maintains a collection of punk ephemera and collectibles, including rare vinyl, posters, photographs, and flyers, as well as a library of signed first editions and artists’ books. Magri and McCranie curated an exhibition of works from their Stephen Sprouse archive at the Dorian Grey Gallery, New York, in 2011, entitled Stephen Sprouse: Jet Boy. Pieces from the collection of approximately 1,500 individual items—including drawings, Xeroxes, swatches, and inspiration material—were also exhibited at the John McWhinnie gallery in 2009 and in Parson’s 2006 Anarchy to Affluence show. A book on their Stephen Sprouse archive will be published by Damiani/D.A.P. in the fall of 2014.